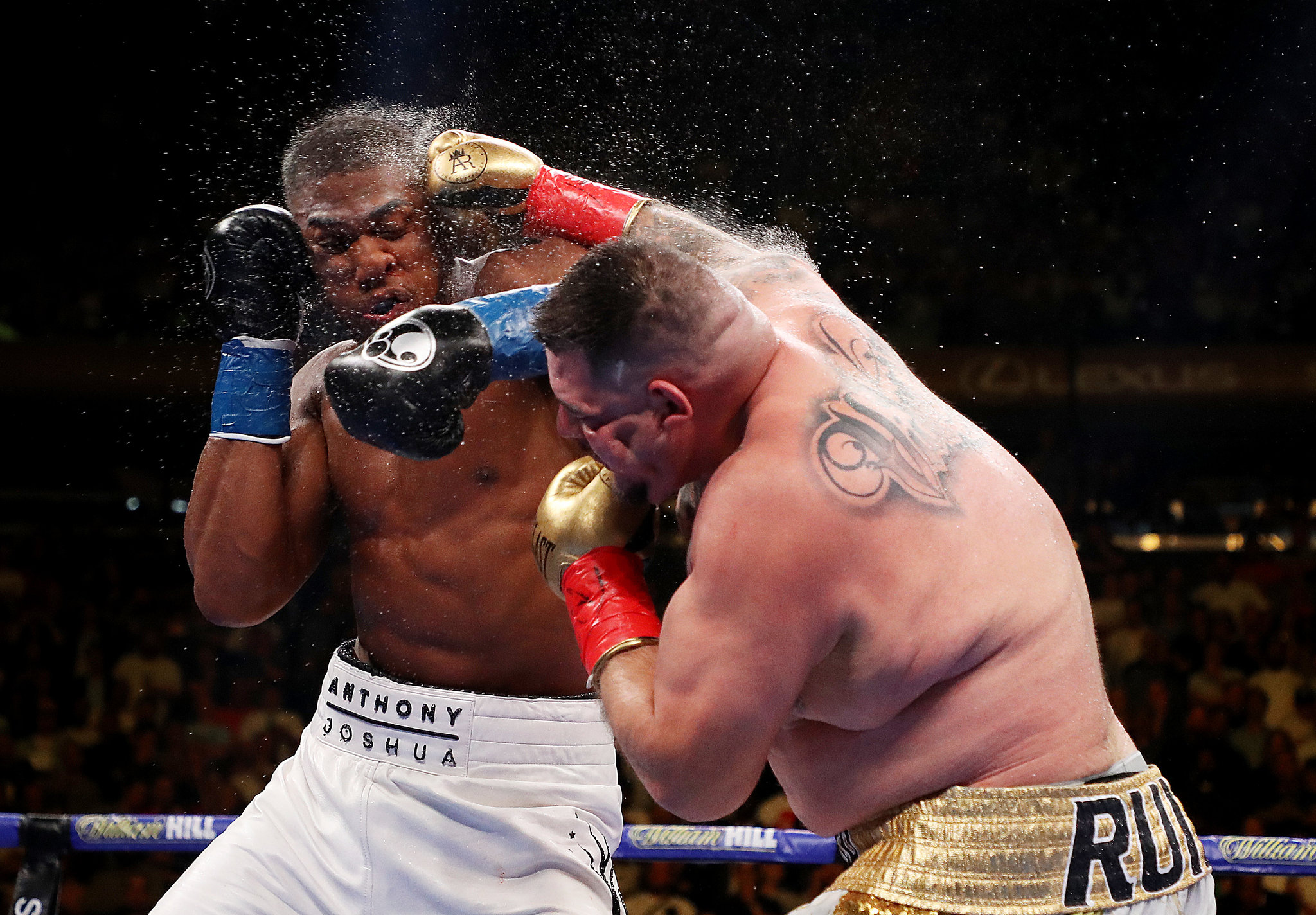 World heavyweight unified boxing champion Anthony Joshua recently visited Nigeria and made notable stops in a strong media blitz, he also took time to talk about his decision to return to base, the loss to Ruiz, his reconnection to Nigeria, and plans for the future amongst others. Taiwo Alimi captures the moments.
No heavyweight champion has brought limelight to Africa since the ‘Rumble in the Jungle’ in Kinshasha, Zaire in 1974 like ‘home boy’ Anthony Joshua (AJ) is doing now. Boxing ‘greatest’ Mohammad Ali in promoting the ‘Rumble in the Jungle’ travelled the length and breathe of Zaire under charismatic leader Mobutu Sese Seko, running and training with children, youth and elderly on the dusty streets of Kinshasa.

The Ali/Foreman was a resounding success grossing an estimated $520 million and over 50 million pay-per-view audience.

The current Nigeria tour embarked by Unified world heavyweight champion, Joshua has again brought world boxing attention to Africa, and the Sagamu-indigene has done great to reawaken the Nigerian spirit of perseverance and greatness. His visits has take AJ to the slums of Makoko, the upbeat of Africa Shrine, home to dreaming Nigerian youths, his ancestral home Sagamu and he has spared with children on the sandy streets of Sagamu, where he spent his formative years.

Anthony Joshua was born in Watford to a Nigerian mother, Yeta Odusanya and a British father of Nigerian and Irish descent, Robert, in 1989.He made his debut alongside his cousin, Ben Illeyemi, who is also a professional boxer, in 2013.

Joshua was reported to have spent some of his early years in Nigeria and was a boarding school student at Mayflower School in Ikenne, hometown of Awolowo. He was said to have returned to the United Kingdom when he was 12 years old.

For AJ, touching base and reconnecting with his ancestors helped him to face the 2019 defeat in the hands of Mexican Andy Ruiz and refocus his attention.

Speaking with the Nigerian media in Lagos, the towering power puncher in company of crown prince of Afrobeat, Femi Kuti, and associates, says his Nigerian connection made him stage the glorious comeback in Saudi Arabia to regain his titles (WBA, IBF, WBO, and IBO).

Standing close to the world champion, it is impossible to believe that he’s only 6 feet 6 inches. His huge upright torso makes him look bigger, but he is relaxed and comfortable in the midst of his people.

He smiles often and readily offered his hands to be shaken by the young and old who wanted a feel of the world champion.

Speaking further on his connection with Nigeria, he offers in another interview with Independent in January:

‘I went through a rough patch. I now understand that the good has to come with the bad.

“It can’t be sunshine forever; there have to be stormy times as well. I went through a rough patch but I dealt with it, and it taught me a lot.

“You need to absorb as much information as you can. Learn to be an outgoing person so people give you information.

“Information is key – it used to be reserved for kings and queens but now we have access. Absorb that. It will help you in that anxiety moment because subconsciously there might be one piece of information that gets you through.

“If you’re someone who makes decisions by yourself, trust in your ability and instinct. The mind will play tricks but you have to take control and trust your gut instinct.

“I listen to a lot of talks or podcasts with insight into how to be strong and stay focused and channel my emotions. I am a sponge that absorbs.

“Every morning and when I get ready for bed. It plays in the background so subconsciously I take in the information.”

“I don’t want to be remembered for 10 years then fade out,” he added. “I want to make a mark on eternity.

“Be dedicated to yourself. That’s not about boxing. Have I read? Have I educated myself? Once I’ve ticked those boxes I can walk into work and perform.

“But then you get to the fight and sometimes you think; what if I turned around and said: ‘I can’t do this?’ Everybody is there. The opponent is in the ring.

“You’ve come too far, so you have to just deal with the anxiety. Once you walk down that path you have burned the bridge behind you, so you might as well dominate.”

He adds that he listened to Fela’s songs a long and got attached with one of Femi Kuti’s rework of his father “Water no get enemy.”

“I needed to get back on track and got connected to “water no get enemy” which Femi sang in memory of Fela. I listened to it a lot and selected it when I was getting into the ring in the refight. It brought back the feeling and spirit to reclaim my glory”

Another reason for returning to his roots, AJ notes is to give back what he has gained.

The main objective was victory and also to bring back the belts. I feel that I have achieved that goal because there was the other side of the world phobia and I felt I have to bring them back to inspire people and use it to make people understand how best to face adversity. People have been asking me what I did differently in the rematch against Ruiz and what I tell them is that it is just a matter of dedication. When I saw what it feels like to lose the belts in one night I felt I must rededicate my time and focus to getting back to where I was. You know before that I have never felt that kind of defeat. It’s all like a rollercoaster and when I lost the fight I became other guy and was like watching the real guy with the belts across the road. So, it gave me a new sense of focus and motivation.”

His formative years in Nigeria, he adds, also helped him appreciate and respects people from all over the world.

“I feel highly connected to Nigeria and because I respect other’s culture and cultural beliefs all over the world, I am not afraid to exhibit mine. Even though I am running my own private race, which is boxing I can’t but feel that I am a part of the great people of Nigeria. I said before the President (Muhammadu Buhari) that if there is anything that they need me for, especially in the area of youth, I will stand up for Nigeria. When I visited the royal father (Akarigbo of Remo) hundreds of people walked with on their foot to the palace.

“My life could definitely have been different. In my house where I grow up I was taught to be respectful and respect the older people around me. And it does n’t matter where they are coming from. I was around the older generation and I tend to learn a lot around them. I did not have anything going into boxing and we have taken it to the world. I believe that the next generation can even do better than us because of the opportunities they have. I think that there is more information out there for them. I think that you can only achieve what you see and you can imagine what the next generation would do given the information at the tip of their finger. It is also important to have drive and I think that works more than the high performance machine in the world.”

At 30, so why is the world boxing top challenger with net worth of $55 million, according to Forbes, still living with his mother?

“Yes! I still live with my mum. If I didn’t I wouldn’t see her because I’m always out and boxing is really big showbiz and I’m always out doing one promo or the other. So, when I go out and come back I’m able to see her and it’s important for me to keep that family union. Family union means a lot to me and helps me to know myself better. I’ve a lot of Nigeria in me; the self belief, determination and family thing.”

AJ is also a faith person. He says praying sustained him while preparing for Joshua/Ruiz 2.

“I pray a lot. It is in the family too. It is a way to stay positive and focus for me. I prayed a lot preparing for Ruiz.”

AJ looks forward to many other big fights but he would not hazard a guess as to when Joshua/Fury would happen. “I open to compete with those men but I can’t say it is Fury or it is that boxer. That is for my manager and promoter to say.

They have my back and I will live that to them. I’ve learnt a lot in these past months. I’ve won, I’ve unified the division twice, become heavyweight champion, I’ve been put on my back, I’ve lost.

I’m an experienced fighter, so there’s a lot more I can give. I’ve done it once I can do it again. I will keep coming back to Nigeria and connect with my people. I have a job to also give back to my community in the UK. It is where I learnt boxing having nothing and I am now a face of the community. Like I look up to Lennox Lewis and Larry Holmes, the younger ones now look up to me and I don’t want to let them down. I want them to know that they can achieve their dreams once they remain focus and determine. We are in a world of information and they only need to seek it to find their ways.