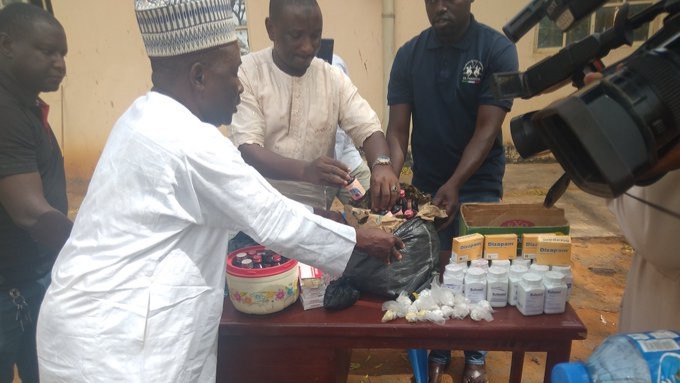 Officials of National Drug Law Enforcement Agency (NDLEA) have arrested a woman simply identified as Madam Queen who has been on the agency watchlist for 10-years over the sale of cannabis.

The suspect was paraded alongside 18 other drug dealers after she was arrested on February 28.

It was also learnt that other drugs including pentazocine injection which is class ‘A’ in prohibited drugs worldwide were recovered from the suspect identified simply as Madam Queen.

“We arrested a very notorious cannabis sativa dealer in the state, Madam Queen from Raymond Village.

”Madam Queen has been on our watch list for the past 10 years and on the 28th of February, she was arrested alongside her sales boy.

“This time around, it was not limited to cannabis sativa, she is now a multi-illicit drug dealer. Apart from the cannabis we seized from her, other drugs including pentazocine injection was also found with her.”

Kibo added that the command made a total seizure of 141.534kg of illicit drugs in February 2020.

READ  ‘The Men Wanted To Have Sex But She Refused’; Slay Queen Tortured Over Missing Phone (Photos & Video)
Share this Post[?]