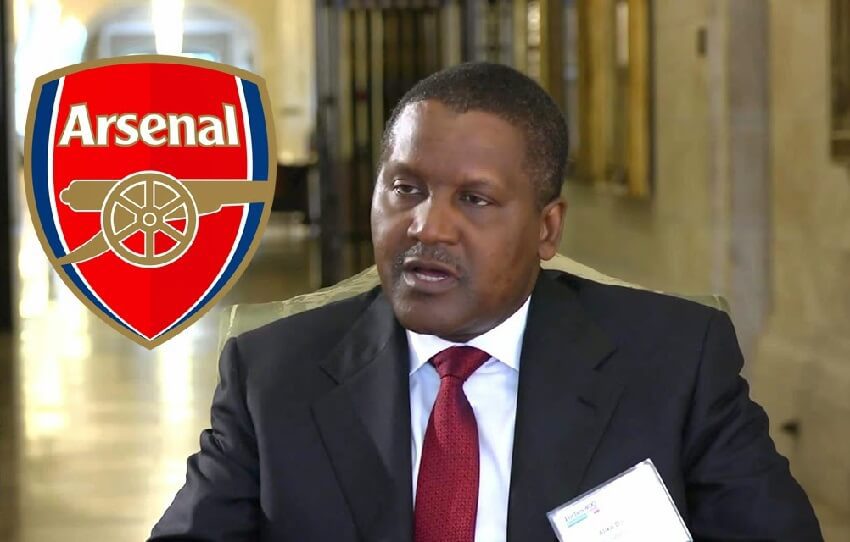 Nigerian Billionaire, Aliko Dangote has been told how much it will cost to buy Arsenal.

The Africa’s richest man has previously stated his desire to buy the North London club.

Dangote says he is focusing on other interests at the moment but is targeting next year as a possible date to launch his bid for the club.

Back in January, he reiterated his intentions, saying, “It is a team that yes I would like to buy someday, but what I keep saying is we have $20billion worth of projects and that’s what I really want to concentrate on.

And now Dangote has been told how much it will cost to buy one of the Premier League’s big sides – by Bob Ratcliffe, the brother of one of Britain’s richest men Sir Jim Ratcliffe.

Sir Jim has been linked with a takeover of Chelsea for some years, but last August his company Ineos completed a deal to take over Nice instead.

His brother Bob, who is head of the football division for Ineos, has revealed how much it would currently cost to take over a Premier League club.

Bob told the Financial Times’ Business of Football Summit that a takeover of a ‘top six’ club would cost at least £2billion.

Meanwhile, a move for a team elsewhere in the Premier League would cost between £150million and £350million.