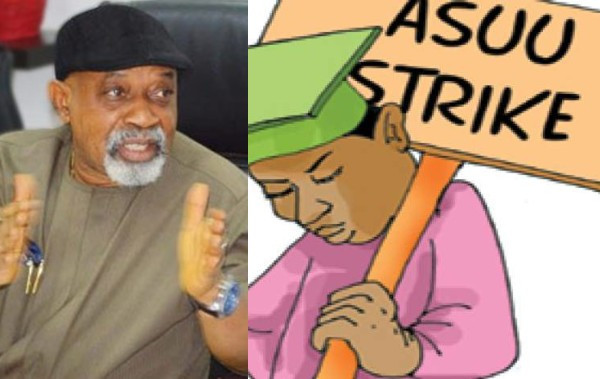 The Federal Government, on Wednesday, declared illegal, the current warning strike embarked upon by the Academic Staff Union of Universities (ASUU) over the implementation of the Integrated Personnel Payroll Information System (IPPIS).

The Minister of Labour and Employment, Dr Chris Ngige, made the declaration while briefing State House correspondents on the outcome of the Federal Executive Council (FEC) meeting presided over by President Muhammadu Buhari on Wednesday.

He said he was shocked by the strike action as the union did not give the government the mandatory strike notice.

Ngige stressed that it was illegal for the university teachers to withdraw their services, he hinted that they should not expect to be paid while on strike.

He, however, added that efforts were on to resolve the disagreement.

Ngige in his words said “Now, we are in same page because they say they want to help fight corruption and weed away ghost workers and they said they have developed a University Transparency and Accountability Solution (UTAS).

“At the last visit to Mr President, we said bring UTAS and we will merge it with IPPIS for you as a special peculiarity. Because, the staff that will manage the IPPIS in the university are staff of the university not people in Abuja.

“We asked ASUU to nominate to serve in IPPIS committee in every institution. So that is where we are after the visit to Mr President.

“So, I was shocked on Monday, I read and saw some people coming out of the university that lecturers have gone on strike.

“I have my children in Nigerian university and I saw them and it is not very cherry news.

“They didn’t give us the mandatory notice before going on strike. So for a start, this strike is illegal. They said it is a warning striking but there is nothing like warning strike. A strike is withdrawal of services for which you are being paid.

“Then the question will arise, if you don’t go to work, do you want to be paid? Is it not corruption? So this is the dilemma.

“So, to solve the dilemma I have invited them to the meeting for tomorrow (Thursday). I have invited the minister of education, their principal employer, the finance ministry and the accountant general of the federation.

“So, we will meet and discuss the way forward because no employee is empowered to dictate his employer on how he or she should be paid. There is an ILO convention on it.

“The important thing is that you receive your compensation for services rendered or work done as at when due.

“So, we hope to solve the problems. ASUU are Nigerians, they are patriotic but tomorrow we hope to engage them.”

The minister recalled that the crisis started with the presidential directive for all public servants to be captured on the IPPIS to enable the government to block leakages and fight corruption.

He said ASUU agreed with the government on the need to block leakages and tackle corruption but that the university teachers maintained that as lecturers, they have special characteristics that must be accommodated.

He explained: “So, government has consistently made it clear that based on peculiarities, IPPIS can capture you. The only thing IPPIS does is that it doesn’t allow you to take double salary. It won’t also pay a BVN two times. That is it.

“So, if you go on sabbatical, this is government’s position, what you should receive in that other place is an allowance. And allowance has a different portal. That is the portal that doctors are using.

“You know that medical consultants have an arrangement by which they are employed at the universities as Lecturer 1, 2 until they ascend to become professors, but hospitals are paying them allowances for clinical duties being done, teaching of medical students, surgical operations, consultations in clinics if you are a physician.

“So, these allowances are captured but IPPIS will not capture two salaries for one person. And government also said that sabbatical is always after seven years. So, there is no frequency for one person on sabbatical.”

Also speaking, Minister of Works and Housing, Babatunde Fashola, revealed that FEC approved the disengagement of the contractor handling the 9th Mile section of the Enugu-Onitsha Highway and re-awarded it to Messrs RCC at the cost of N29.4 billion.

He said: “Of course, the 9th Mile section, as you might know, is a very tricky, difficult area; very steep, dangerous, a point of many accidents before.

“So, we have to change design and do a lot of other alterations in quality to ensure now that we manage, not only the erosion there, but that very good work is done.”

The Senior Special Assistant to the President (Media & Publicity), Garba Shehu, who joined the ministers for the briefing said FEC clarified that the newly introduced Value Added Tax (VAT) of 7.5 per cent affect government contracts awarded from February 1, 2020.

He said the approval followed the submission of the report of a cabinet committee on the effective date of the commencement of the 7.5 perc ent VAT on government contracts.

The Minister of Agriculture, Sabo Nanono, said FEC approved a contract for pest control and animal diseases worth N13.9 billion.