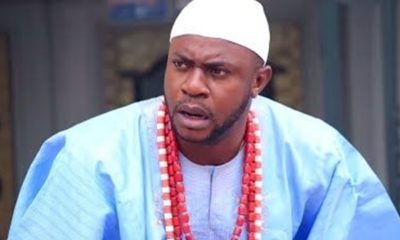 Townsmen and a prince of Otun Ekiti, Ekiti State have debunked rumours that one of Nollywood most sought-after Yoruba actors, Odunlade Adekola, who hails from the town is set to become the next King of his hometown.

Recall that some weeks ago, news spread like wildfire that popular actor, Odunlade Adekola, is set to become the king of his hometown, Otun, in Ekiti State.

According to the viral reports it is the turn of Adekola’s family, which is part of the ruling houses in the town, to produce a king.

However, surprisingly, even as the news went viral, the Odunlade Adekola Films Production boss refused to say anything publicly. He neither released a statement to confirm or deny the claim, nor posted any information on his social media pages where he has lots of followers.

But investigations by Saturday Beats, have revealed that it is not the turn of the actor’s family to produce the king of the town.

Speaking on anonymity, an indigene of the town said, “There are five ruling houses in the town and someone in his (Odunlade)’s lineage has been king before in recent times. It has not got to his family’s turn but if he is interested in the throne, he can fight for it because the governor (Kayode Fayemi) likes him.

Presently, the five ruling houses are jostling to produce the king and they even visited the governor’s office today (Friday).”

And a prince in the town disclosed to Saturday Beats that Adekola actually declared his interest to be the king but he was turned down.

The prince said, “Contrary to the news that has been flying around, Odunlade Adekola, is not going to be the next king of the town. He said he was interested in becoming the king but he was not accepted because it is not the turn of his family to produce the king.”

Meanwhile, when the news first broke, many of the actor’s fans had expressed worry about whether being a king would signal the end of his career. Some even went on social media pleading with the Abeokuta-based entertainer not to honour the invitation to become a monarch because many of his fans still wanted to be seeing his face in movies.

Adekola is undoubtedly one of the biggest actors in the movie industry at the moment. He shot to limelight in 2003 when he featured in the film, ‘Asiri Gomina Wa’. He has since gone ahead to appear in over 100 movies and produced many flicks too. The versatile actor also records movie soundtracks and other songs.