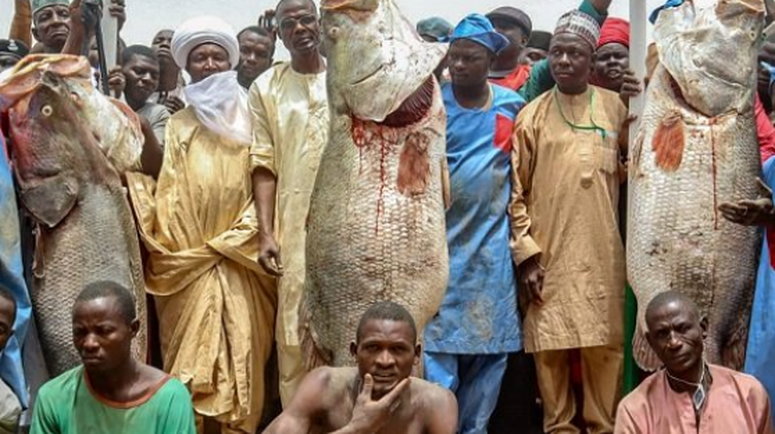 The News Agency of Nigeria (NAN) reports that Mr Ya’u’s catch was adjudged the best among the fishes caught by thousands of fishermen that participated in the annual cultural festival held in Kebbi State.

Bala Yahaya-Bagaye clinched the second position with his fish that weighed 75 kilogramme, while Maiwake Sani came third for catching a fish weighing 70 kilogramme.

Speaking at the occasion, the Special Guest of Honour and the Senate President, Ahmad Lawan, said that the festival was a demonstration of Nigeria’s rich culture.

“When I looked at the fishing pond, I said ‘oh God we are blessed’; what we only need is for us to harness the resources that we are endowed with in this country.

“The history of the festival is long, dating back to 1934. I learned that the celebration could not hold for over 10 years due to insecurity.

“We have to thank God for making it possible and commend our armed forces for their efforts to secure of our nation.

“We will not get tired of making sure that you have a good working environment.

“This is an international event that drew people from neigbouring countries; this is a bond that must be sustained.”

Mr Lawan lamented the number of out-of-school children, especially in Northern Nigeria, and called for proper action to reduce the menace.

While congratulating the winners, the Senate President urged those who did not win not to be discouraged, urging them to redouble efforts for a more competitive challenge in subsequent years.

He announced a donation of N5 million to be shared among all participants to give all a sense of belonging.

Gov. Atiku Bagudu of Kebbi State described the event as “historic and worthy of celebration” by people of the state and beyond.

“It is a celebration of historic people; we must celebrate what unites us more than what divides us.

“Today, we are happy to host many dignitaries who converged here to celebrate with us.

“It is a celebration of equitable competition where fishermen come from all over, both from within and outside Nigeria. This certainly is a symbol of unity. This is a challenge for all of us as Nigerians.

“As people of Kebbi, we are very proud to have you here and we pray Almighty God will take each one of you back home safely,” he said.

Earlier in a welcome address, the Emir of Argungu, Sama’la Mera, appreciated President Muhammadu Buhari for paving way for relative peace that culminated into organising the fishing festival.

He also appreciated the state governor and all others who contributed towards ensuring the success of the event, especially the Senate President, Ahmed Lawal, the Sultan of Sokoto, Sa’ad Abubakar III, GSM operators and others sponsors.

He said: “We have been waiting for this event for the past 10 years. We are grateful to Almighty God for making it possible for us to witness the 60th event.”

Dignitaries at the occasion included the Minister of Information and Culture, Lai Mohammed, Minister of Justice, Abubakar Malami, Minister of Police Affairs, Maigari Dangyade, leader of the Senate, Yahaya Abdullahi, and Kabiru Gaya.