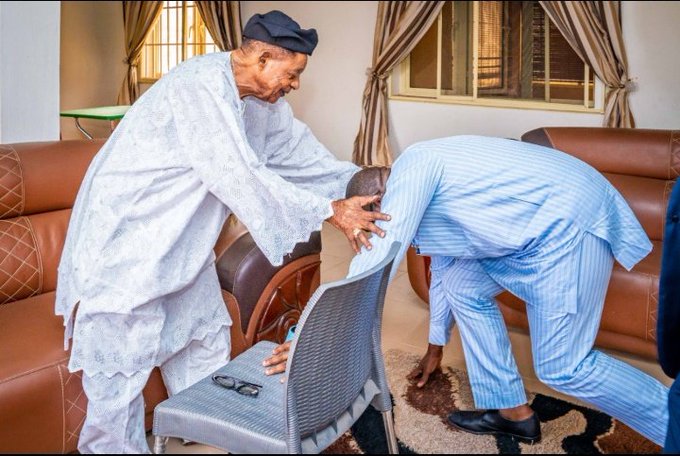 The visit is coming after the Alaafin wrote the Ekiti Governor over his recent query sent to 11 monarchs in the southwest state.

This online news platform recalls that Governor Fayemi had asked the traditional rulers in the query letter to give reasons for their non -cooperation with his administration.

This was contained in a memo, entitled, “ Re -Absence from State Functions and Council of Traditional Rulers ’ Monthly Meetings” which was signed by the Permanent Secretary of the Bureau of Chieftaincy Affairs, Mr A . O. Adeoye.

GovernorFayemi’s memo was issued to the affected Obas on Wednesday and they were given 72 hours to send in their explanations.

The memo reads “It has come to the attention of Mr Governor that Your Royal Majesty has not been attending the monthly statutory meetings of the State Council of Traditional Rulers and state official functions since August 2019.

“ Your conspicuous absence at the council meetings and state official functions, without any excuse or justification are considered inimical to the proper administration of the chieftaincy institution you represent.

“ Therefore, Mr Governor has directed that Your Royal Majesty should forward your representation for this inaction, through this office within 72 hours on the receipt of this letter.”

Reacting to the memo, the Alaafin in a letter written on behalf of seven paramount royal fathers in Yoruba land and dated Thursday, March 12, warned Governor Fayemi against treating the traditional institution in Yorubaland with levity. The Alaafin warned the Ekiti State government in the letter to desist from meddling into the affairs of the traditional rulers.

The letter reads as thus; “Since the case is still in court, we will not want to comment further on it as law-abiding citizens. I, however, would have expected that Your Excellency waits till the end of the court process before acting on the matter.

“It is in this note that I, along with my fellow traditional rulers across Yorubaland feel very sad that Your Excellency issued a query to the 16 Ekiti crowned respected traditional rulers of high esteem in Yorubaland for not bowing their heads to their subordinate by not attending the council meeting under their subordinate. That exercise and without mincing words is, to say the least subjudice.

“To some races, nothing outside the mundane is attached to their traditional institution. Whereas, that of Yoruba is beyond the mundane as it is also ancestral and spiritual. The Yoruba oba is the representative of the ancestors, the real owner of the land or ground.

“It is on this basis that we will advise against any attempt to treat traditional institution in Yorubaland with levity and to avoid any attempt of importing any subculture of traditional degradation into Yorubaland.

“It is ironic that while the predecessors in office and ancestors of these 16 crowned obas and their subjects displayed uncommon patriotism, courage and commitment to confront the intimidating military prowess of Ibadan Army for 16 years (1870-1886), Your Excellency as one of the beneficiaries of the legacy bequeathed by these Kings of Yoruba history is now embarking on an exercise that will rubbish the contributions of your ancestors.”