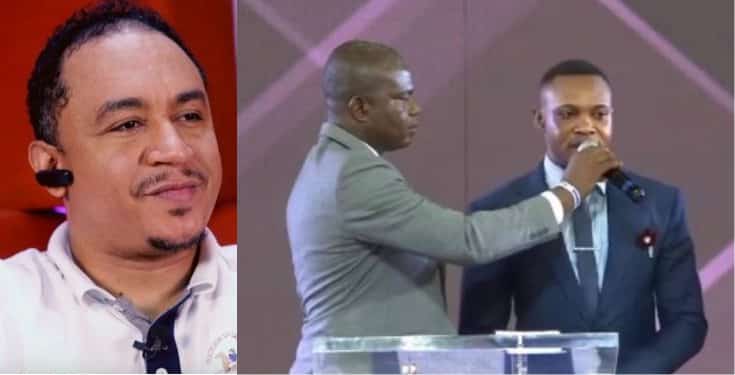 Controversial OAP, Daddy Freeze has reacted to a viral video of a Salvation Ministries member, who testified about testing negative for the deadly coronavirus after coming in contact with the Italian man who tested positive in Nigeria.

Recall that on the February 27, Nigeria registered it first case of CODVID-19, after an Italian man who contracted the virus was hospitalized in Lagos.

According to the man identified as Amadi Emmanuel, he and others tested negative for coronavirus after the General Overseer of the Church, Pastor David Ibiyeomie prayed for them and also made him take Holy Communion.

He also recalled how a member of the church tested negative for ebola after Pastor Ibiyeomie prayed for him.

Here is the video;

However reacting to the testimony, Daddy Freeze stated that Africans believe that religion which is a ”more lethal virus than Coronavirus,” can be used to destroy the latter.

The media personality averred that saying religion can destroy coronavirus, is the equivalent of saying contracting HIV will cure syphilis. He added that the Christianity practiced in most parts of Nigeria is a full fledged religion that bears no semblance to what Christ taught.

“Only in Africa can people believe that religion, a more potent and lethal virus than Corona, can be used to destroy Corona virus .
–
Saying religion can destroy Corona virus is the equivalent of saying contracting HIV will cure syphilis.
–
Which virus is worse, religion or Covid19? Religion and poverty go hand in hand. According to statistics, the more religious a nation; the poorer that nation.
–
Hunger, resulting from poverty kills more people daily than Covid19 has globally. I’m amazed that anyone can make religion a hero in this equation.
–
And don’t even start with the ‘Christianity is not a religion’ BS. In my opinion, as guided by the scriptures, the Christianity practiced in most parts of Nigeria is a full fledged religion that bears no semblance to what Christ taught! ~FRZ” In similar development, there was mixed reactions on social media as Pastor E.A Adeboye declared that Coronavirus cannot affect those in God’s ‘secret place’.

In the video posted on his verified Instagram handle, the clergyman said

“I want to assure you that there is no virus that can come near you at all because it is written that those that dwell in the secret place of the most high, shall abide under the shadow of the Almighty. I believe that this is a time for God to show you clearly that there is a difference between those who serve him wholeheartedly and those who do not”.