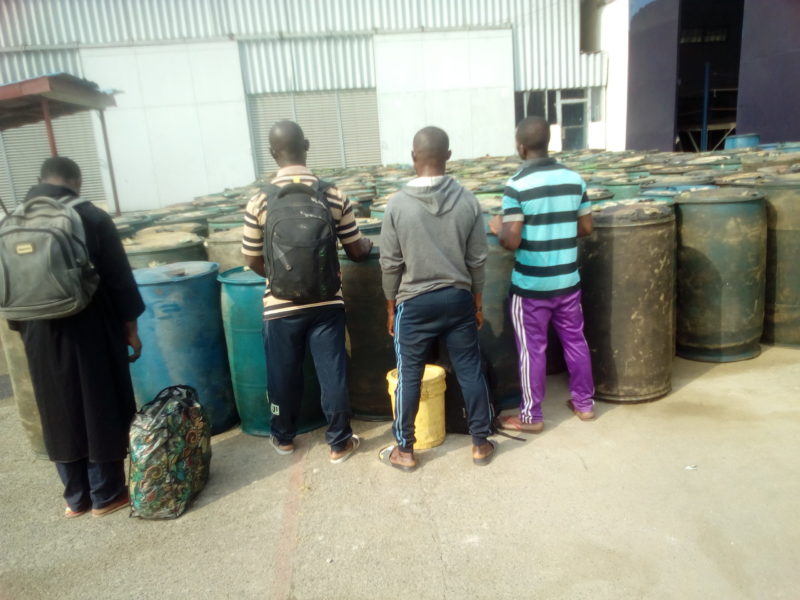 A patrol team of the Nigerian Navy Ship Victory in Calabar has intercepted 204 drums of diesel being smuggled to Cameroon.

Handing over the petroleum product and the suspects, the Commander of NNS Victory, Rear Admiral Vincent Okeke, who was represented by Navy Captain Ibrahim Gwaska, said,

“On Friday 13 March 2020 at about 0930, NNS Victory patrol team on routine patrol intercepted and arrested a wooden boat laden with substances suspected to be illegally refined Automotive Gas Oil (AGO) at Calabar River entrance en route to the Republic of Cameroon.

“The boat was arrested with four crew members on board. The boat, crew and the impounded product was escorted to the Base. On arrival at the Base jetty, 204 drums of AGO were offloaded from the wooden boat.

“Investigation revealed that the suspected illegally refined AGO was loaded from Ijaw Creek around Bonny Island, Rivers State and was heading to Wovia in Cameroon.”

He added that on the same date and location another boat laden with 105 drums of AGO was arrested.

“However, the suspects absconded on sighting the Base gunboats. Prior to this very arrest, on 4 March 2020 to be precise, the Base patrol team arrested three suspects and 54 drums of illegally refined PMS in a wooden boat at Agbana West Point by Tom Shot Island Breakwaters.

“These were handed to the State Commandant Nigeria Security and Civil Defence Corps by Capt I.A. Gwaska at about 1330 Friday, 6 March, 2020 on behalf of the Commander NNS Victory, Rear Admiral Vincent Okeke. Similarly, on Saturday 7 March, 2020 a wooden boat laden with 42 bags of rice was arrested without suspects. The total market value of the arrested items is N22m.”

READ  Man Butchers Lover, Sells Parts To Herbalists And Clerics For N1000 Each

He warned would-be criminals to desist from illegal acts and engage in legitimate business or face the wrath of the law.

The state Commandant of NSCDC, Danladi Elisha received the petroleum products and the suspects and promised to diligently prosecute the matter.