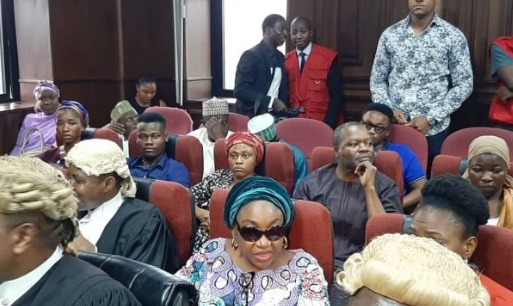 Mrs Oyo-Ita was picked by the anti-graft agency ahead of her arraignment today over an alleged N570 million fraud.

According to report, the former top civil servant will be arraigned along with her former Special Assistant Ubong Okon Effiok and seven others.

Oyo-Ita will be arraigned with another former aide identified as Titus Okunrinboye Tosin, who was allegedly managing an account where N600 million was frozen and forfeited to the federal government.

According to a source in the anti-graft agency, who spoke in confidence, the allegations against Oyo-Ita covered her tenure as a director in the civil service.

The source said: “We have completed the investigation of the Head of the Civil Service of the Federation and we have filed charges against her and eight other suspects.

“Our team is ready for the trial over allegations against her and others amounting to about N570 million.

“Don’t forget that Justice Folashade Ogunbanjo-Giwa in September 2019 granted an order for the permanent forfeiture of about N600million in two slush accounts being managed for the ex-Head of Service.

“In the two accounts traced to Oyo-Ita’s former aide, Titus Okunrinboye Tosin, our operatives uncovered N548million in one and N51.9million in another. The accounts were used to launder funds when Oyo-Ita was a director in the Ministry of Special Duties.

“When the EFCC filed and argued its application before the Federal High Court in Abuja, presided over by Justice Taiwo Taiwo, none of the parties came up to claim the cash.”

A statement by the Acting Head, Media and Publicity of EFCC, Mr. Tony Orilade, confirmed the trial of Winnifred Oyo-Ita.

The statement said: “The EFCC, will on Monday arraign the immediate past Head of the Civil Service of the Federation, HoCSF, Winnifred Oyo-Ita.

“She will be arraigned before Justice Taiwo Taiwo of the Federal High Court, sitting in Abuja.

“They will be arraigned for fraud in relation to Duty Tour Allowances, DTA; Estacodes; conference fees fraud and receiving kick-backs on contracts.

“During investigation, it was discovered that Oyo-Ita, in her roles in the civil service as Director, Permanent Secretary and Head of Service, used her companies as well as Effiok’s and Umar’s companies as fronts to receive kickbacks from contractors of various ministries and parastatals where she worked.

“The former head of service, in collusion with Effiok who was her Special Assistant, along with one Titus Okunriboye Tosin, made bogus claims of fictitious DTA, Estacodes, conference fees, which were paid by the government to the accounts of the suspects.”