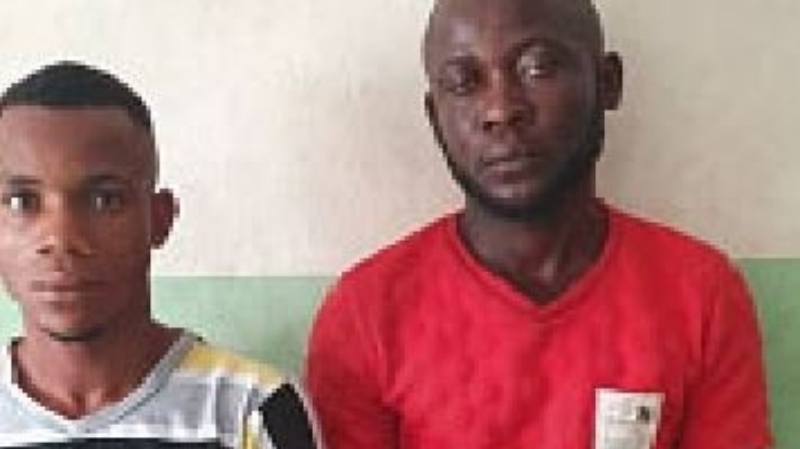 Two suspected kidnappers have been arrested by operatives of the Special Armed Robbery Squad (SARS) in Imo state.

One of the suspects identified as Ifeanyi Asiatugbulam who is a 34-year-old is reportedly the only surviving gang member of the late millionaire kidnapper and former police officer, Corporal Collins Ezenwa (aka E-money).

It was also learnt that the other 20-year-old suspect identified as Kingsley Udo Johnson is reportedly to be Asiatugbulam’s recruit.

According to a police source, the suspects were arrested at Ikot Akwa in Nsit Atai Local Government Area in Akwa Ibom State in an operation coordinated by the SARS commander in the state, CSP Victor Godfrey.

Recall that Ifeanyi Asiatugbulam was the only surviving kidnap suspect who escaped while E-money and two other gang members were gunned down in a gun duel with SARS operatives on January 27, 2018 at a kidnap den in Atta Ikeduru, Imo state.

E-Money and three other kidnap suspects on sighting SARS operatives opened fire but were overpowered by SARS operatives where three of them were gunned down while Asiatugbulam escaped.

It was further disclosed on April 20, 2018 that Asiatugbulam was reportedly arrested in another kidnap case in which one Onyia Destiny Chinyere was kidnapped and driven to their den at Oru East, Imo State.

They were intercepted by SARS and Ogbaku police operatives along Owerri/Onitsha Road.

One of the suspects known as Mopol was shot dead while Asiatugbulam was reportedly arrested with one AK47 rifle with 54 live 7.6mm ammunition which was recovered from him.

According to The Nation, Asiatugbulam mysteriously escaped from police custody but the suspects were trailed to Akwa Ibom where they were arrested in their hideout in a remote village.

The source said the suspect, Asiatugbulam, had confessed to the crimes, disclosing that he worked with the late kidnap kingpin E-Money.

Reacting on the incident, the Police Public Relations in the state, Mr. Orlando Ikeokwu confirmed the arrest of the kidnap suspects and stated that the police had started investigating the matter.