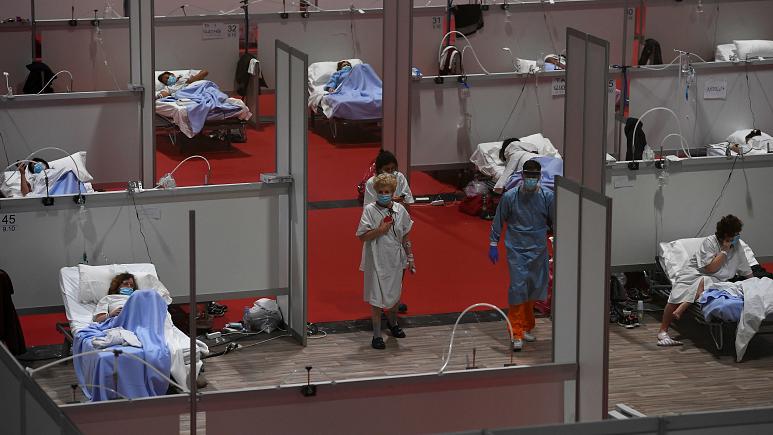 Latest figures from Spanish health authorities continue to show a decline in the number of new cases and deaths from coronavirus.

The number of new confirmed cases represents a fall for the fourth day in a row, suggesting strict social distancing measures have begun to show their effects.

More people are continuing to be infected and die from the virus, but at a slower rate compared to last week.

The number of new confirmed cases fell to 4,273, Spain’s health authority reported on Monday, compared to more than 6,000 new cases on Sunday and over 7,000 on Saturday.

The number of deaths from coronavirus in 24 hours also fell for the third consecutive day to 637, officials said, down from 674 on Sunday and 809 on Saturday. It’s the lowest daily increase since March 24, but takes the total number of deaths to over 13,000.

Meanwhile, a further 2,357 people were reported to have recovered from the virus on Monday, bringing the total to over 40,000.

Austrian Chancellor Sebastian Kurz says his government aims to start allowing some shops to reopen next week, the first stage in a very long, phased return to normal life.

A tiger at New York’s Bronx zoo has tested positive for the new coronavirus, in what’s thought to be the first known infection in an animal in the US or a tiger anywhere

Relaxing lockdown measures not yet an option in Spain

The decline in the coronavirus death and infection rate in Spain is encouraging news for health authorities, often overwhelmed by the pandemic in the worst affected country in Europe after Italy.

In a press briefing on Sunday, Maria Jose Sierra, from the Centre for Health Alerts and Emergencies, said “one in three” patients with coronavirus had now recovered, before laying the next steps of the “de-escalation” of the crisis.

She said the government’s goal would eventually move into a stage of testing everyone with symptoms of the virus, and confirmed that “serious” studying of the effectiveness of face masks was underway.

Spanish Prime Minister Pedro Sanchez told citizens on Saturday that the country was finally “in a position to bend the curve”.

But in a press conference, he announced an extension to the three-week lockdown – to April 25 – warning that Spain was not yet out of the woods.

He said: “If the climb has been hard, let’s not fool ourselves, the descent will not be smoother. We are facing the great crisis of our lives.”

On Friday, Spain surpassed Italy to become the second worst virus-hit nation in the world – behind that of the United States.

Therefore, any consideration of relaxing stringent lockdown measures during this time “would have a worse result than returning to the starting point,” Sanchez said at the conference.

He added: “The victory that puts an end to it will only come with a vaccine that unfortunately will take a few months.”

On Sunday authorities in Italy reported 525 new deaths in 24 hours, the lowest recorded death toll in over two weeks.

More than 15,800 people have died in Italy, which has more recorded deaths than any other country in the world.

Officials said the numbers showed that the country likely was past the peak of the epidemic, a hopeful sign that the social distancing measures are having an impact.

But the country’s health minister warned that the situation is still “dramatic” and that there would be “difficult months ahead”.

Officials in the country have said that the movement restrictions in place have saved thousands of lives.

Boris Johnson spent Sunday night in hospital to undergo tests for “persistent” coronavirus symptoms after being diagnosed with the illness ten days ago.

Meanwhile, Queen Elizabeth II compared the unfolding coronavirus pandemic to World War II in an address to the British public.

These developments came as there was a surge in cases of coronavirus in the United Kingdom with more than 5,900 new cases and 600 deaths in 24 hours. The increase in cases could be due to an increase in testing capacity.

“The only effective way of bending the curve down is to reduce that social contact,” said health secretary Matt Hancock, who recently recovered from COVID-19. He said the government had been “crystal clear” about the rules and that the evidence shows a “high proportion” of the public are following them.

He said that following the rules was “mission critical” and told the “minority” of people breaking rules that they were risking their lives and the lives of others.

Hancock said that even though people who have recovered are likely immune, scientists do not yet know enough to be able to change social distancing rules.

Dr Jenny Harries, the deputy chief medical officer for England said that the government was testing in care homes and prisons, where there have been outbreaks.

After apologising, she said the “justifiable” focus on her behaviour “risks becoming a distraction from the hugely important job that government and the medical profession has to do in getting the country through this coronavirus pandemic.”