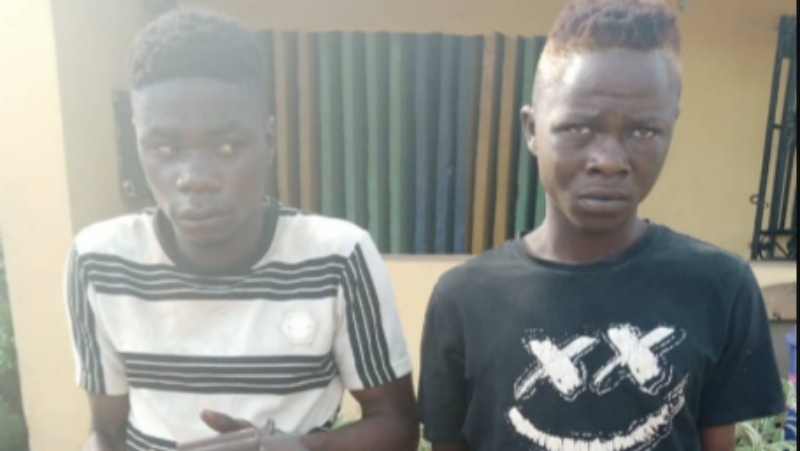 Two suspects have been arrested by the Ogun state police command for armed robbery.

The suspects identified as Ayomide Joseph and Olajide Ajisomo were arrested after robbing one Adegoke Sodipe at gunpoint at Ikugbonmire junction while on his way back from Lagos with his brother.

Two arrested for robbery in Ogun state
According to one of the victims identified as Sodipe, they were robbed by three robbers who dispossessed them of their personal belongings which include Infinix phone valued at N25,000, UBA ATM card, and So-safe corps identity card.

Addressing the newsmen on the incident, the Police Public Relations in the state, Abimbola Oyeyemi said the suspects were apprehended after the robbery victims raised an alarm.

“Upon the report, the DPO Mowe division SP Marvis Jayeola quickly dispatched his detectives to the scene where the arrested member of the gang was handed over to the police.

“Having taken possession of the suspect, the operatives embarked on intelligent-based investigation, which led to the arrest of the second suspect. A locally-made double barrel shot gun was recovered from them”.

The Commissioner of Police, Kenneth Ebrimson has ordered that the suspects be transferred to Special Anti Robbery Squad (SARS) for discreet investigation