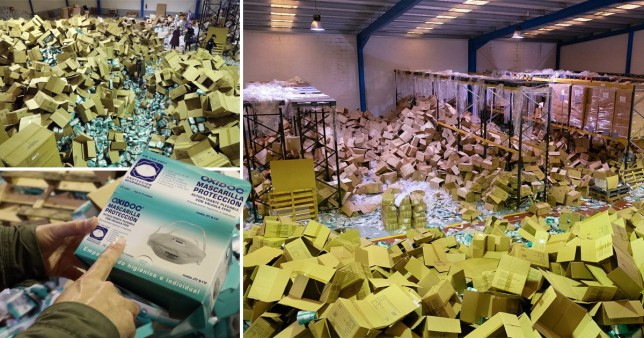 A businessman has been apprehended for stealing a total of 2 million face masks and selling them causing shortage to curb the coronavirus pandemic.

A Business man has been arrested by police after he stole up to 2 million face masks from a medical supplies company that had gone into liquidation .

The business man sold the masks to his contacts in Portugal after keeping stock at a locked warehouse on an industrial estate in the Galician cathedral city of Santiago de Compostela, Spain according to reports emanating from Spain.

The Spanish government had to buy face masks from China in an emergency purchase as it was left without enough masks when people became infected with coronavirus and hundreds of people began to die every day in Spain.

According to investigators the theft is said to have occurred at the end of February.

Alfonso Rueda, vice-president of the regional Xunta de Galicia regional government, visited the theft site on Monday and said only around 100 out of the two million face masks stored there had been left untouched.

He said: ‘The police received a tip-off that there could have been valuable health equipment here which would have been so necessary in the fight against Covid-19. ‘It had been cleaned out by the time they arrived. We calculate two million face masks have been stolen. Only the boxes are left.

‘There are also empty boxes which contained surgical gloves but we don’t know at this stage exactly how many are missing.’

He added: ‘The police investigation has led to the identification and arrest of the main suspect, a person from Santiago who has already appeared in court.’

The suspect, a director at a well-known local real estate firm has been arrested.