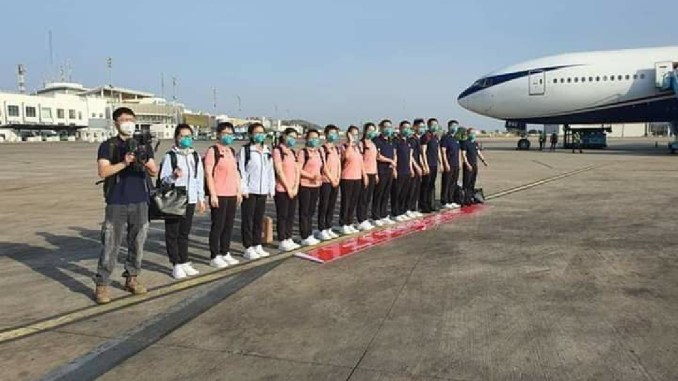 The Lagos Labour Congress has criticised the govt decision for bringing in medical doctors from China to aid in the fight against coronavirus.

Lagos Labour yesterday faulted Federal Government’s resolve to accept from the construction giant, China Civil Engineering Construction Corporation, CCECC, 15 Chinese medical experts to assist the country in the battle against the coronavirus, despite opposition from such groups as Nigeria Medical Association, NMA and National Association of Resident Doctors, NARD, United Labour Congress of Nigeria, ULC, in a statement by its President, Joe Ajaero, warned that the Chinese experts might worsen the nation’s woes if care was not taken.

The statement read: “Why would such a crucial decision be taken in secret without coordinate input from critical stakeholders in the nation? This sector is a highly specialised area which requires that at all times the input of the professionals in this sector should be sought.

“We are also worried that a company which has had a pervasive influence on the government of this nation, being in charge of various critical infrastructural projects in this country, is the one making this offer at this time.

‘’Could it be that this may be our government’s way of granting favour to the company to take charge of their Chinese personnel during this pandemic? Was there a quid pro quo that may compromise our nation’s ethos, interests and medical processes?

‘’Congress is forced to speak up on this matter on hearing the reaction of the SGF, Boss Mustapha, on the complaints and concerns raised by many Nigerians on the attempt to bring in the Chinese without proper consultation.

‘’We view that response as unproductive, if not entirely dismissive of the well-founded objections raised by these concerned organisations and individuals.

“It is always better to err on the side of caution than suffer adverse consequences eventually. Prevention is better than cure, they say. The Federal Government should address the fears of Nigerians who have rejected the idea of the Chinese experts, instead of the apparent imperious declaration that there is no going back on that decision as if the opinions of Nigerians do not matter.

‘’We believe that for the nation to have a successful battle against the pandemic, we must carry our indigenous stakeholders along and have everybody working together without the schisms that have become apparent.

“Allowing the Chinese to distract us at this time is counterproductive and we think the government should reconsider its stance for now, pending when it has fully consulted all the relevant stakeholders in the battle against the disease.”