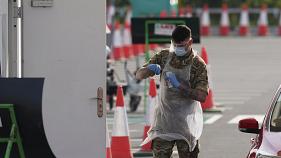 Spain recorded 683 deaths in 24 hours compared to 757 yesterday, a slight drop that has renewed hope that the epidemic is levelling off.

The number of newly confirmed cases also dropped from 6,180 yesterday to 5,756 today.

Italy has also seen its daily death toll fall after putting in place a country-wide lockdown in early March.

Meanwhile, France and the UK are preparing to extend their lockdown deadlines beyond next week as COVID-19 deaths continue to mount.

In France, President Emmanuel Macron is expected to discuss the extension in a television address on Monday, the Elysée Palace has said.

It comes after authorities recorded another 541 deaths over a 24-hour period on Wednesday, bringing the total to 10,869 deaths since the outbreak.

Another 7,000 people are currently being treated in intensive care units in hospital.

Meanwhile, the UK reached a grim milestone as it recorded an increase of 938 coronavirus-related deaths in a single day on Wednesday.

It brings the country’s total to 7,097 deaths, while a further 60,733 people have been confirmed to have contracted the illness.

Like France, the British government is also expected to extend its three-week lockdown past Monday; however, little is known how long this extension will be – or when it will be announced – as Prime Minister Boris Johnson remains in an intensive care unit being treated for COVID-19.