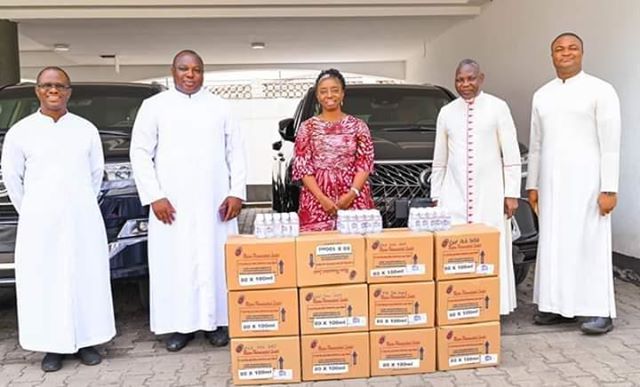 The Catholic Archbishop of Lagos, Most Rev Dr Alfred Adewale Martins, on behalf of the Archdiocese of Lagos, has donated some relief materials to Lagos State Government in support of its efforts to provide assistance to the poor and contain the coronavirus pandemic. The items included 500 bags of rice and beans and 4000 hand sanitizers. In alignment with the CBCN, he also announced the decision to make St Raphael Divine Mercy Hospital, Ijede available for use as an isolation centre if the need arises.

While presenting the materials to the wife of Lagos State Governor, Dr (Mrs) Ibijoke Sanwo-Olu at the State House, Marina, the Chancellor of the Catholic Archdiocese of Lagos, Very Rev Msgr Anthony Obanla, who represented the Archbishop commended the Governor and the Government of Lagos State for the proactive steps that have been taken since the first index case was identified in the State.

The Archbishop said“We commend the hard work that has been done in ensuring that we are a model state in the effort to stem the spread of the virus. We also commend the effort that has been made to provide palliatives to support the most vulnerable among us. However, we cannot but admit that providing for all the people in our state is a herculean task and it must create its own nightmare for the government. So, as a Church, we hear the cry of the people as well as understand the challenges of Government.”

Archbishop Martins noted that the task of managing the pandemic and taking care of the less-privileged was enormous and so government should be supported, hence the Catholic Church in the Archdiocese of Lagos decided to show her support in order to ease the pain of poor and vulnerable within the state. While noting that it is the tradition of the Catholic Church all over the world, led by Pope Francis, to make her own contribution to social welfare especially in moments of difficulties such as this, he said: “Today, we wish to present these cartons of 4000 Hand sanitisers and these bags of food items to support the State Government in taking care of our people.

Responding, Dr (Mrs) Ibijoke Sanwo-Olu, on behalf of her husband, thanked the Catholic Church for its kind gesture and assured that the donated items will be properly utilized for the purposes they were meant for.

The Archbishop later revealed that the support offered to Lagos State Government was in addition to the provisions for the poor that he directed the over 180 parishes of the Archdiocese to make in their different localities spread all over the State. He commended the Priests and the faithful of the different Parishes for taking action on the directive, thereby revealing Jesus’ love of the poor in the provisions they are making for the people.

About 78 smaller parishes that could not afford to make the provisions without some support were assisted with various sums of money from the nearly 10million naira that was raised from the Archbishop’s Appeal to the faithful at the beginning of the lockdown. He expressed gratitude to the lay faithful who within a short period of time helped him to raise the money.

The Archbishop commended all those who took part in the 7days of Prayer and Fasting and the prayer of Divine Mercy before the Paschal Triduum. He then encouraged all the faithful to continue praying the rosary as well as the Prayer for an end to the Coronavirus Pandemic with the assurance that God would not fail to listen to our petitions.

READ  Faces Behind Deal That Landed Nigeria In The $9.6Billion ‘Mess’