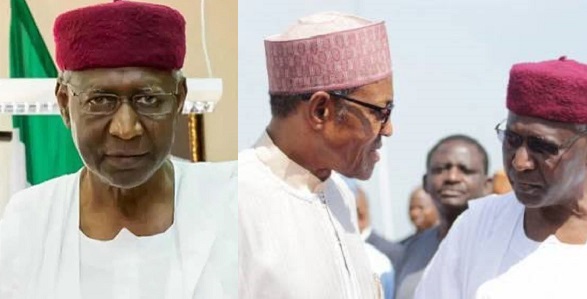 Special Adviser to the President on Media and Publicity, Femi Adesina, confirmed this in a press statement.

Adesina said the Chief of Staff to Nigeria’s President, Major General Muhammadu (retd.), died on Friday, about 25 days after testing positive for COVID-19.

He said, “The Presidency regrets to announce the passage of the Chief of Staff to the President, Mallam Abba Kyari.

“The deceased had tested positive to the ravaging COVID-19, and had been receiving treatment. But he died on Friday, April 17, 2020.

“Funeral arrangements will be announced shortly.”

The late Kyari, who was one of the most influential and powerful members of the Buhari regime, visited Germany and Egypt after Nigeria recorded its first coronavirus case on February 27.

In Germany, he and the Minister of Power, Saleh Mamman, on March 9, met Siemens officials over the power deal signed with the company.

Barely a week after the report on his status, Kyari announced his decision to leave Abuja for Lagos to receive medical treatment in a private facility, where he is believed to have died.

Upon his arrival at Lagos, the State and Federal Governments refused to disclose his whereabouts.

The announcement of Kyari’s death came a few hours after the Nigeria Centre for Disease Control stated that no fewer than 11 people have died of coronavirus-related complications in the country.

However, it could not be ascertained if Kyari’s death had been counted as one of the fatalities.

The NCDC also said that the confirmed cases of coronavirus have increased to 493 in Nigeria after 51 new infections were recorded on Friday.

It was reported that of the 17 coronavirus-related deaths recorded in Nigeria, 11 patients died in Lagos, two in Abuja, one each in Kano, Edo, Delta, and Katsina.

NCDC said, “Fifty-one new cases of #COVID19 have been reported: 32 in Lagos, six in Kano, five in Kwara, two in FCT, two in Oyo, two in Katsina, one in Ogun, one in Ekiti.

The NCDC also said that no fewer than 7153 samples have been tested for #COVID-19 in the country.

It was reported that Buhari initially appointed Kyari as his Chief of Staff on August 27, 2015 and reappointed him on July 5, 2019 after winning his second term election.

The late Kyari held Bachelors and Masters Degrees from the University of Cambridge and the University of Warwick in Law and Sociology. He had worked with the New Nigeria Development Company, New Africa Holdings, African International Bank, United Bank for Africa, Unilever, and Mobil in various capacities over the years.