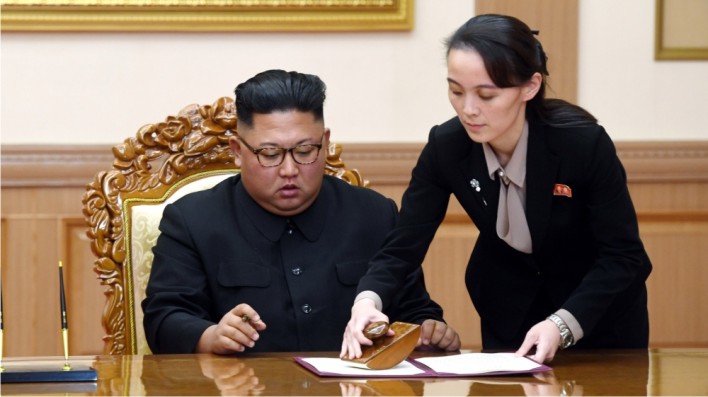 While rumours about the death of Kim Jong-un or about a vegetative state multiply, it is his sister who would have been designated to succeed him if necessary.

Kim Jong-un, who reigns over North Korea with an iron fist, is he dead? Impossible to say given the lack of information from the dictatorship. But rumours are rife. The vice-president of HKSTV (Hong Kong Satellite Television) announced her death on the Chinese social network Weibo before deleting her post. An ad that was picked up by Chinese media. Side Japanese media, no death announced but a magazine, “the Shukan Gendai”, announces a vegetative state after the heart surgery undergone by Kim Jong-un and which would have gone bad, with no chance of survival in the long term.

According to Reuters, on the contrary, the train of the North Korean leader was spotted during the week in Wonsan. It is in this seaside resort in eastern North Korea that the Kim family goes on vacation. But without being able to certify that Kim Jong-un was on board …

What is almost certain, however, is that his heart operation did not go as planned. Several American media, including CNN, described his condition as “serious” and several sources confirmed that Chinese doctors had visited his bedside.

Impossible to disentangle the true from the false, therefore. But in the event of death, who would succeed him? A priori, the Kim dynasty started with Kim Il-sung, the grandfather of Kim Jong-un would continue with his younger sister, Kim Yo-jong, who would be in a good position to become the first “dictator” in the world. Because if she were to sit on the North Korean throne, we should not expect a softening from the one sometimes described as “more bloodthirsty than Kim Jong-un”. Portrait.

According to several reports and specialists, Kim Yo-jong was promoted to an important position in December 2019, an equivalent position of vice-president. And the fact that she would succeed Kim Jong-un at his death would have been formalized at that time. ” Kim Yo-jong was officially named heiress in December 2019 by the Central Committee of the Workers ‘ Party, ” the Japanese daily Yomiuri announced a few days ago.

Kim Jong-un’s two children are also far too young to rule and his brother, Kim Jong-chol, is said to be uninterested.

In the shadows, she is the one who has orchestrated her brother’s communication plans for several years. In 2011, she was appointed by Kim Jong-un to the State Communication Department. The young woman, who embodies a new generation of executives of the regime, then sets out to build the image of Kim Jong-un – in the shade, since the state media will only quote her for the first time 2014, on the sidelines of a ballot to renew the Parliament. At the end of 2014, a sign of absolute confidence, Kim Jong-un appointed her deputy director of propaganda for the regime. In the cult of personality that she forges around her elder, she endeavours to show a benevolent, accessible head of state, like their grandfather Kim Il-sung, founder of the country. According to “The Guardian”, she then encourages Kim Jong-un to visit the homes of the humble and to surround herself with improbable personalities such as the American basketball player Dennis Rodman.

Unlike her brother, she does not want to take the light. One of the first images of Kim Yo-jong dates from the beginning of 2012. North Koreans discover it on state television, crying at the funeral of her father. She was then around 23 years old, her exact date of birth is unknown. Since then, she has appeared more frequently during ceremonies. For example, she accompanied her brother during the meeting between the two Koreas at the time of the 2018 Olympic Games.

Kim Yo-jong’s career is meteoric. Being the brother of North Korea’s “supreme leader” probably makes things easier. Nevertheless: at each stage of her career, she gave satisfaction to Kim Jong-un, whom we know however versatile and who would have already killed members of his family. After studying in Switzerland, this computer graduate who speaks several languages ​​climbed the ranks until her appointment in October 2017 to the Political Bureau of the Workers’ Party of Korea, a decision-making body chaired by her brother.

Information about her private life is largely unverifiable. According to the Guardian, she married in early 2015 the son of the vice-president of the Workers’ Party, Chloe Ryong-Hae, himself recently promoted to the powerful military commission of the Party, and is the mother of a little girl. According to sources, she was born between 1987 and 1989. She came as Kim Jong-un from the union between the previous dictator Kim Jong-il and his third wife, a dancer named Ko Yong-hui who also did the object of a cult of personality.

In addition to her presence during the historic meeting between the two Koreas at the time of the Olympic Games, she would have played – according to specialists in North Korea – a preponderant role in the rapprochement between Donald Trump and Kim Jong-un after the diplomatic escalation about nuclear weapons. And last March, she publicly praised Donald Trump for sending Kim Jong-un a letter in which he hoped to maintain good bilateral relations and offered help to deal with the coronavirus pandemic.

She does not only handle the carrot, but she also knows how to play the stick. One month ago, for the first time, she spoke publicly about a live-fire military exercise that moved South Koreans. She then called them a “scared dog that barks”. “Pug” in a way, to use the words of Laurent Fabius.

The scale it is taking on the international scene is certainly not innocent.

Like her brother, who passed by several establishments with an assumed name, Kim Yo-jong studied discreetly and under high protection in a private school in Bern, Switzerland, before returning to North Korea at the end from the 2000s. She is fluent in English and French.