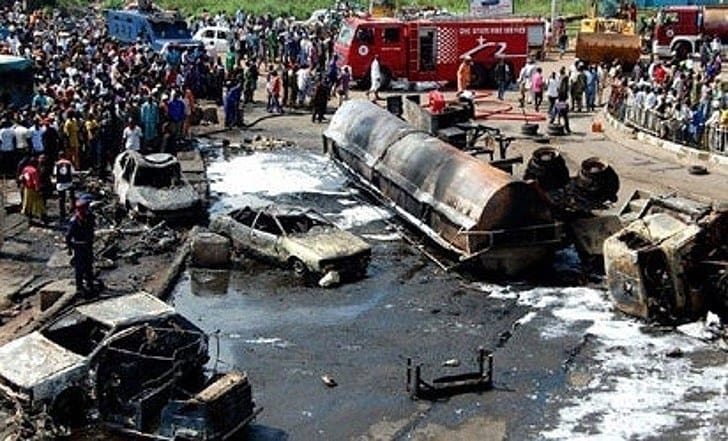 Many scampered for safety after a fuel-laden tanker went up in flames at Moniya area of Ibadan, the Oyo State capital, on Friday.

Fire broke out after the tanker which was conveying diesel lost control while descending the slope beside a filling station at Moniya, crushing a vehicle travelling to Ogbomoso.

It was gathered that several shops, cars, motorcycles, excavator including the motor park close to Akinyele Local Government Area headquarters were destroyed by the inferno which lasted several minutes.

Traders and residents in the area dashed for safety from the flames after the tanker caught fire.

The Chief Fire Officer, Oyo State Fire Service, Mr. Adewuyi Moshood, said his men arrived at the scene in good time considering the distance they needed to cover to get to the spot. Adewuyi said: “The fire started when a fully laden fuel tanker lost control while descending the slope beside a filling station at Moniya. There was brake failure and the vehicle crushed a vehicle going to Ogbomoso.”

“One passenger, who was trapped in the vehicle got burnt. One other life was lost but we are yet to determine the number of casualties in the incidence,” he explained.