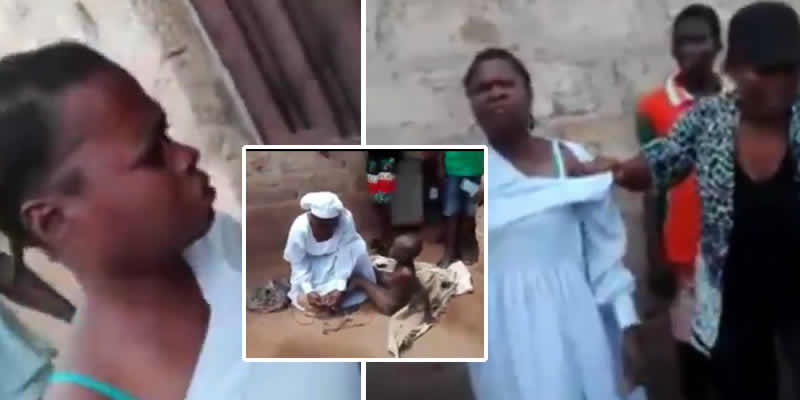 A woman identified as Iya Ayo, a member of a yet to be identified white garment church was arrested on Sunday, 17th of May at Fesojaye community in Osogbo, the Osun State capital, after the single mother tied up her son in a sack for four days in a bid to deliver him from evil spirit.

Members and Pastors of some White garment churches are popularly known for adopting deliverance methods that violates human rights and the most recent of their inhumane acts was witnessed in Osogbo as Iya Ayo shoved her sacked child into her wardrobe for deliverance because he was accused of being possessed of an evil spirit after stealing a pack of biscuits.

The woman tied up her son last Thursday until on Sunday May 16, she left the boy inside the house and went to church when a neighbour fumigating his surroundings heard him crying for help.

The neighbor immediately alerted the leaders of the community who in turn alerted the police, the woman was arrested and her son whose hand and foot were tied before being put in a bean sack was rescued by the police on Sunday morning.

Chairman of the community, Alfa Shakiru Gbadegesin, confirmed the incident, says the boy’s mother does not relate much with anybody in the community.

Confirming the incident, the spokesperson of the state police command, DSP Yemisi Opalola, said the woman was arrested and made to sign an undertaking never to maltreat the child. Opalola said efforts are being made to search for the father of the child so the woman can hand Ayo over to him. She added that the police are closely monitoring the situation.

”We went to arrest her and she told her part of the story, how the boy has been disturbing her. In a nutshell, the police told her to go and look for the father of the boy if she cannot take care of the child again. She promised to do so. The DPO also followed up yesterday to ensured that the father is found.

“There is no way the police can keep the child with them. They have made her to write an undertaking even with a surety who promised she will never do it again, she said.