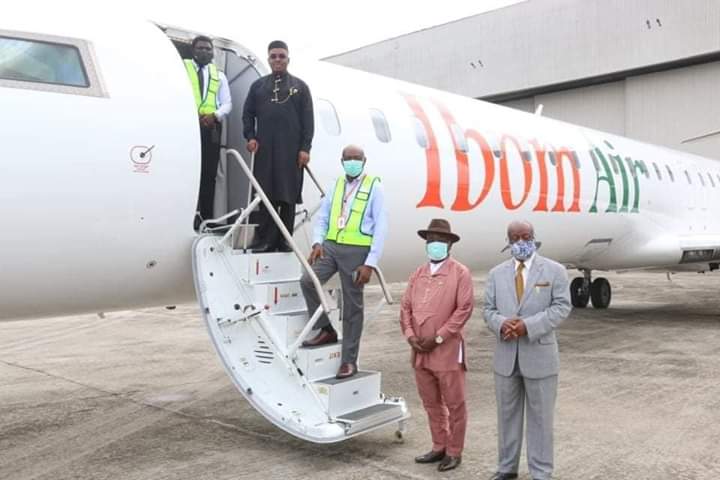 The Akwa Ibom State aviation industry has expanded with the acquisition of additional Aircraft which steps the number to four in the Ibom Air fleet .

Receiving the Aircraft at the Victor Attah International Airport, Uyo , the state governor, Mr. Udom Emmanuel said the aeroplane which has warranty in the domestic aviation is the latest addition to the fleet of Ibom Air.

“this is the latest in this fleet and when you have an airplane that is still within warranty in the domestic aviation, you can bit your chest that have quality product and that safety is assured”, he explained.

Governor Emmanuel said that conceptualisation of the state investing in the aviation sector date back to 2016, adding that experts have attested to the quality of Aircraft owned and services operated by Ibom Air.

“….the air efficiency is super so nothing to fear and also our safety standard remains to be beaten by any other airline. I have the assurance of the management of the business that they will maintain instead of going down they will improve as there is room for improvement.”

According to him, ” one do not have to be afraid flying in the plane because it is fitted with air efficiency including safety-safe-net” and expressed optimism that in no time Ibom Air would be a reference point in the aviation industry of the West African sub region .

Earlier, the Chairman, Ibom Air Limited, Air Commodore Idongesit Nkanga Rtd, Asaid that the Aircraft was expected in the state last December but was delayed because of clearing issues and thanked God for the arrival of the Aircraft.

While explaining that ” the plane is backed with modern facilities including hyper technology that is against bacteria and viruses, coronavirus inclusive”, he commended the vision of the state administration to venture into the aviation sector, describing the investment as profitable.

Also speaking , the Chief Executive Officer, Ibom Air, Capt. Mfon Udom, said that it is a thing of joy to see the industry expanding and assured of quality service delivery to the teaming passengers on resumption of flight operations.

Highpoint of the event was unveiling of the Aircraft by Governor Udom Emmanuel, assisted by his Deputy Mr Mosses Ekpo, Prelate Sunday Mbang and Bishop Uma Ukpai who prayed for the success of the industry.