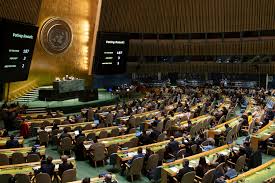 The United Nations (UN) yesterday warned that the fight against the COVID-19 pandemic might be jeopardised unless governments retained “the trust and participation of citizens throughout.”

The admonition came as doubts about the virus grew among many Nigerians. Viral videos have since emerged purporting to show COVID-19 patients partying in isolation wards, even as #EndCovidScamNow trended.

On Tuesday, the Zamfara State government criticised the Nigerian Centre for Disease Control (NCDC) for allegedly inflating the figures of cases in the state. It was the latest in a series of spats between the NCDC and some state governors, who accused the agency of plotting to manipulate figures.

Only yesterday, the Nigerian Medical Association (NMA) in Lagos directed its members to proceed immediately on an indefinite sit-at-home strike, saying security agencies were harassing its members on essential duties.

But in an article titled ‘Global Solidarity with Africa is an Imperative’, published on the UN news website, Secretary-General Antonio Guterres noted that in the fight against the pandemic, “The human rights of all must be respected.”

The UN chief warned: “The pandemic threatens African progress. It will aggravate long-standing inequalities and heighten hunger, malnutrition and vulnerability to disease. Already, demand for Africa’s commodities, tourism and remittances are declining. The opening of the trade zone has been pushed back – and millions could be pushed into extreme poverty. The virus has taken more than 2,500 African lives. Vigilance and preparedness are critical.”

Guterres nevertheless commended “what African countries have done already, together with the African Union,” saying he had “been calling for a global response package amounting to at least 10 per cent of the world’s Gross Domestic Product for Africa” and continues to “advocate a comprehensive debt framework – starting with an across-the-board debt standstill for countries unable to service their debt, followed by targeted debt relief and a comprehensive approach to structural issues in the international debt architecture to prevent defaults.”

In the statement they issued yesterday, NMA leaders Dr Saliu Oseni (chairman) and Dr Ramon Moronkola (secretary) said: “The Lagos State branch has resolved that it is presently unsafe for its members to continue to provide healthcare services under the present confused arrangement. We resolve that all doctors under the auspices of the Nigerian Medical Association in Lagos proceed on a sit-at-home starting from 6:00 p.m. today, May 20, indefinitely.

“Until such time when the state government and the Commissioner of Police are clear on how they wish to operationalise the lockdown/restriction of movement directive as it relates to essential service and service providers, including healthcare services and doctors.”

The Federal Government had ordered an 8:00 p.m. to 6:00 a.m. curfew and an interstate restriction to movement nationwide in a bid to contain the spread of the virus.

“As a direct result of the conflicting directives of the government and the Lagos State Commissioner of Police, the Lagos State branch of Nigerian Medical Association (NMA) was inundated yesterday evening with several cases of harassments and intimidation of doctors and other health workers by officers and men of the Police Command in Lagos State.”

Journalists also had a raw deal at the hands of police personnel. Yusuf Adekunle, the Head of Investigation at The Nation newspaper, said some of the police officers were annoyed that the media had blamed them for lapses in enforcing the restrictions aimed at containing COVID-19.

“The officers refused to allow anyone go, saying that was the instruction given to them. There were bankers on essential duties that had fed money into ATMs. Some of them even had letters. But the police said they would impound all our vehicles and hand them over to the task force in the morning. I had to go back,” he said.

READ  Jonathan fingered as investigators trace another $1.3bn to Diezani

TVCs crime reporter, Ivy Kanu, said: “I noticed that the roadblocks had increased. The place was packed full. Over 50 people were there. The impounded vehicles were more than 20 and more were still coming in. Some people had been taken into custody and put into cells. Some others were standing outside. I was asked to go behind the counter. That was where I was before the DPO announced that we should come outside. They handed our keys to us and told us to sleep in our cars till the next morning.”

A police source told The Guardian: “The IGP instructed a total lockdown. It is expected of every essential duty personnel to comply with the directive. We mean business this time around. Journalists and other essential duty workers had been exempted but in the new order, nobody is exempted.”

Later, in a press statement, however, Force Public Relations Officer (FPRO) DCP Frank Mba clarified: “All essential workers including medical personnel, firefighters, ambulance services, journalists etc. are exempted from the restriction to the movement associated with both the partial lockdown and the national curfew across the federation.

The change of heart by the police is believed to have followed a wave of complaints made to the Presidential Task Force on COVID-19 (PTF).

In yet another statement, late yesterday, the police IGP stated: “The Force wishes to state that it is not oblivious of the sensitive, indispensable, patriotic and frontline role of the nation’s workforce that falls within the category of essential service providers particularly as it relates to efforts to curtail and contain the COVID-19 pandemic.

“To this effect, all essential workers including medical personnel, ambulance service providers, journalists, fire-fighters etc., are exempted from the movement restriction orders as well as the national curfew.”

The IGP however admonished “all workers who fall within these categories not to take undue advantage of their positions and privileges to advance other purposes not connected with the performance of their duties within the stated period.”

The Federal Capital Territory (FCT) administration, meanwhile, has insisted that places of worship will remain shut for the next two weeks as announced by the PTF.

Disclosing this at a meeting between the administration and representatives of the Christian and Muslim communities, FCT Minister Mohammed Musa Bello said: “The FCT is guided by advice from medical experts and guidelines from the PTF, which directed that all measures approved two weeks earlier be extended for another two weeks and these include the restriction on religious gatherings.”

But Catholic Caritas Foundation of Nigeria, the official relief and development arm of the Catholic Bishops’ Conference of Nigeria (CBCN), disagreed, saying: “If the government could lift restrictions on market places and banks, why is it not possible to lift the ban on churches and mosques. It is surprising that a nation that is religious doesn’t count churches and mosques as important aspects of its essential life.

“They have seen that neither medicine, pharmacy or pharmacology has helped us. Government should immediately, without further delay, allow churches and mosques go back. It should allow church and mosque authorities the responsibility to cater to their people and put in place requirements for protection.”