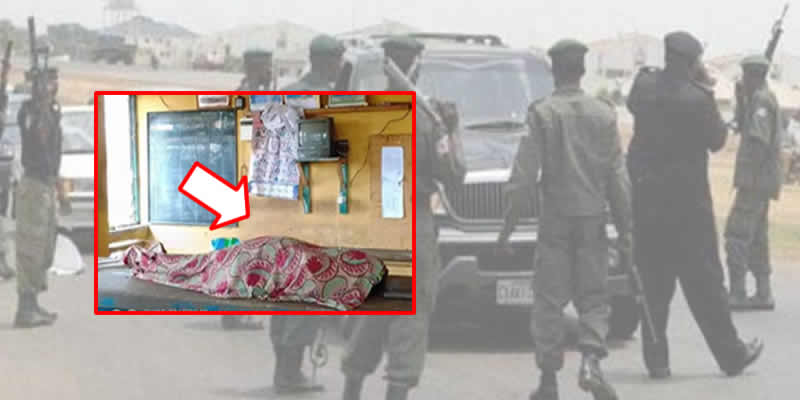 There was chaos in Abigi area of Ogun State, on Thursday, 21st of May, following the death of a pregnant a woman who was in labor and gave up the ghost at a police checkpoint after she was delayed.

Mrs Opeoluwa Waidat Adedeji, a mother of six was said to have called an okada man to assist her to the hospital when she discovered she had labor pains. The woman who was assisted by her son on the okada to the general hospital from Ita- Otu got delayed at sowore for hours due to the resistant of the police officers at the check point.

According to late Opeoluwa’s son, all their pleas to these officers fell on their deaf ears despite seeing the pregnant woman in a noticeable labor pains.

“The officers insisted that we turn back despite our passionate appeals

“It was after they discovered that she has lost consciousness before they allowed us.

“And painfully, I lost my mother before she got to the hospital

The incident made the youths of the local government to troop out in large number to protest the insensitivity and inhuman attitude of the police officers on duty. The timely intervention of the local government transition chairman, Comrade Oluwafemi Onanuga, the Alarige of Ibiade and the Ojotunmoro of Abigi doused the tension and the palpable crisis that would have erupted.

The protesting youth who carried the corpse to the police headquarters at Abigi was ready for a total showdown but the timely intervention of some notable indigenes and royal fathers of the communities also calmed the situation. The corpse dumped at Police Station

While calming the nerves of the youths, the local government chairman promised to monitor the case and make sure that justice is done to it.

He equally promised to get the approval of His Excellency,Prince Dapo Abiodun Mfr, the executive Governor of Ogun state to empower at least, two of the deceased children into the workforce of Ogun Waterside local government.