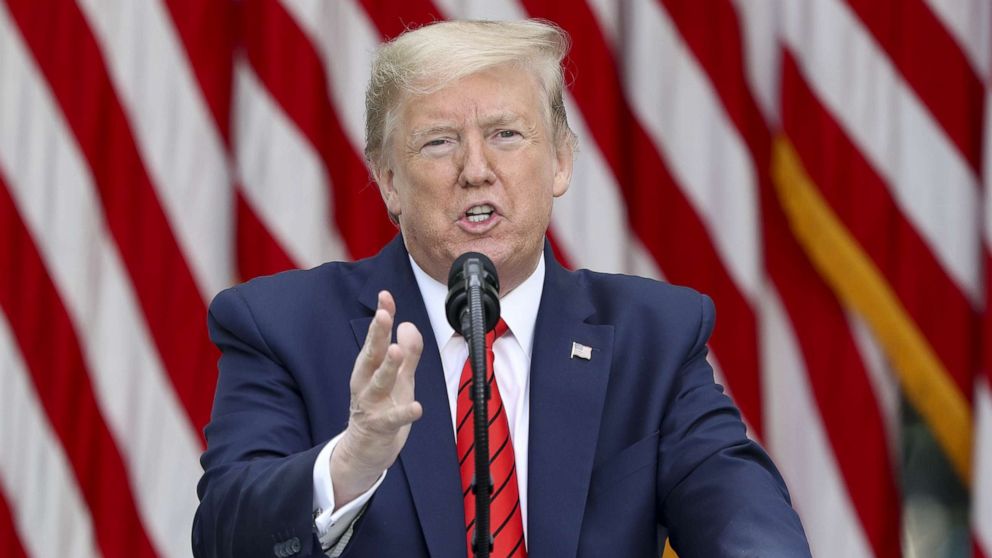 Health care interventions and efforts to contain the novel coronavirus (COVID-19) in Nigeria and indeed Africa, might crumble if the United States President, Donald Trump, withdraws funds from the World Health Organisation (WHO).

This is just as medical doctors and other health workers in Nigeria are worried that over four weeks after, the President Muhammadu Buhari-led administration was yet to keep its promise to review upwards their paltry N500 hazard allowance and establish comprehensive life insurance for at least 5,000 health workers.

The federal government, represented by the Federal Ministry of Health (FMoH), had signed a Memorandum of Understanding (MoU) with the tripartite unions of Nigerian Medical Association (NMA), Pharmaceutical Society of Nigeria (PSN) and National Association of Nigerian Nurses and Midwives (NANNM) on the issue.

WHO spearheads technical inputs and funding of most healthcare interventions in Nigeria, including diseases surveillance systems,mass immunisation activities against childhood killer diseases such as polio, meningitis, measles, cholera, among others, the novel coronavirus (COVID-19), as well health system strengthening and trainings of medics in the country.

Available figures indicate that the US is the biggest funder of the UN agency and has since 2010, made available to it about $3.5billion by way of funding. In 2019 alone, WHO received over $450million from the US.

But Trump, on Tuesday, threatened to permanently pull funding from the WHO and consider a US exit from the health agency if it does not commit to “major substantive improvements” within 30 days.

The implications of US pulling out from funding the WHO on healthcare delivery in the country and on efforts in containing COVID-19 could be dire.

To a virologist/vaccinologist and Chief Executive Officer of Innovative Biotech in Keffi, Nasarawa State and the US, Dr. Simon Agwale: “The impact will be very serious for Africa, because most of our programmes are supported by the WHO, including our vaccination programme that is already complicated by COVID-19 and disease surveillance systems.”

President, National Association of Resident Doctors (NARD), Dr. Aliyu Sokomba, told The Guardian: “For over a month now, Trump has suspended funding for the WHO. The withdrawal of the funding from US undoubtedly would affect the activities of the organisation and hence global health, as already shown by the funding gap announced by the WHO director general during one of his media briefings.

“But then, the organisation will find a way to continue to survive.”

Director General of the National Institute for Medical Research (NIMR) Yaba, Lagos, Prof. Babatunde Salako, said: “The implication of that is obvious; the WHO may have challenges in meeting its financial obligations, especially towards the poor nations of the world. And for this pandemic, African nations may bear the brunt of the fallout of this conflict.”

Pioneer director general of the Nigerian Institute of Pharmaceutical Research and Development (NIPRD), Prof. Charles Wambebe, said: “In practical terms, nothing will happen on the WHO side, because it will continue to carry out its functions.

“Furthermore, other donors will replace funds cut off by Trump. But on the part of Trump, it is a political tool to show his core supporters that he is tough.”

A clinical pharmacist, public health analyst and National Chairman, Association of Hospital and Administrative Pharmacists of Nigeria (AHAPN), Dr. Kingsley Chiedu Amibor, said: “I think it is most unfortunate that the US, which is a major source of funding to the WHO, is contemplating permanent withdrawal of funding and membership of the global health body.”

Amibor said the WHO, on its part, has been able to justify the funds received from the US, with interventionist health programmes that have benefited African and third world countries, including Nigeria and other nations of the world, adding that some of such programmes include control of the neglected tropical diseases, such as leishmaniasis, which affects mostly the world’s poorest, and if the US carries out its threat, it means some of these diseases would be further neglected by various governments, especially in Africa.

The AHAPN president further explained: “Secondly, a good number of countries in Africa are dependent on aid from WHO for the fight against COVID-19 in the form of Personal Protective Equipment (PPE), such as facemasks, goggles, hand gloves and others. So, if the US finally makes good its threat, then it is going to be a big blow for the global efforts to eradicate the virus and seriously undermine control efforts. Don’t forget that WHO is equally involved in funding research for a vaccine for COVID-19.

“One can understand the thinking of the Trump administration right now, you know the US values the lives of her citizens a lot and for her to lose over 8,000 of her nationals, with over one million others infected with the deadly virus is very devastating to her.

“In the opinion of the administration, all these suffering and deaths could have been averted if China had been transparent in her handling of information on COVID-19, especially at the initial phase of the pandemic. US feels the WHO did not do enough to warn the rest of the world early enough about the vicious and highly contagious epidemic playing out in China between late last year and early this year.”

President, Pharmaceutical Society of Nigeria (PSN), Mazi Sam Ohuabunwa, added: “I think it is going to be temporary. I don’t think a President has the power; another President can change it or people will go to court. They have a process that will not allow the position to stay.

“Globally, the world needs joint efforts, especially in search for vaccines and better care for diseases and other things that the WHO does. US is about the biggest funder of the WHO and if she pulls out completely from funding the WHO, it will affect the world, especially we in the third world, because there is a lot of WHO support in public health, such as in vaccination against childhood killer diseases.

“The WHO ability to support Nigeria and other countries with weak health systems will be diminished. It will affect us. But I believe it is going to be short-term, because when a new president comes, it will be reversed. Trump is pushing too far.

“The WHO announced that they are going to do internal audit. I believe no human being is perfect. Should we sack Trump for all his errors? You cannot be bullying an institution when you have also made a lot of mistakes. It will be premature to judge the WHO. The right thing to say is, let us investigate this, especially the WHO and nations. But to bully and threaten is not expected of statesmen, and I think Trump is embarrassing his office.”

Reacting to Trump’s latest threat, Minister of Health, Dr. Osagie Ehanire, said: “That is a question for WHO to answer; how it will affect their resource base.”

“The reforms should be undertaken after a critical appraisal of WHO’s past, present and future, including its current global response to the COVID-19 pandemic. Such reform efforts is in line with the strategic and objective requirements for organisational growth, but should be driven in a non-adversarial and non-political mode and never through undue threats or bellicose propensities.

“…It will be unwise for any country in the world to withdraw its funding support for the WHO, especially at this stage of the COVID-19 pandemic. It will amount to cutting one’s nose to spite one’s face. It will surely not do the cause of global health any good.

“Indeed, except any country is in denial, no one country can resolve the current challenges posed by the COVID-19 pandemic. The times we are in requires a united global front/alliance to defeat COVID-19.

“I, therefore, expect the reform of WHO to incorporate in it, the appropriate financing of the body.”

On the way forward, Amibor said: “I think what is needed now is restraint, dialogue and compromise. There must be a meeting point among the three actors- WHO, US and China- because I can assure you that WHO will find it extremely difficult to meet up with her obligations of monitoring and coordinating global health in the event of permanent US withdrawal.

“Yes, there are consolations here and there, like the news that the Bill and Melinda Gates Foundation has promised to increase funding to WHO by an initial $100million or so. But will the funding be sustained by the Foundation? I understand China too made about $20million available to the WHO in the wake of the US withdrawal. This is commendable, but it is still a far cry from what the US had been making available to the global body annually.

“In all, permanent withdrawal by the US from the WHO will be very devastating and seriously jeopardise not just the global control efforts on COVID-19, but other humanitarian efforts that WHO is involved with, especially in Africa.”

Agwale said this again calls for African countries to localise production of vaccines and other medical supplies and drive distribution and market share growth across Sub-Sahara Africa, adding that this would provide local, reliable, and sustainable supply and also enable us to be strategically positioned to respond to epidemics within the sub-region.

The virologist said Nigeria needs to build up a resilient health system by leveraging the local pharmaceutical and public health strength and showcase that building and sustaining a strong health system is not beyond reach.

Meanwhile, the WHO on Wednesday issued a measured response to Trump’s threat, declining to escalate an ongoing feud with the US leader.

Its Director General, Dr. Tedros Adhanom Ghebreyesus, during a press conference, declined to go into details about its communication with the US president, saying: “We have, of course, received the letter and we are looking into it.”

Executive Director of WHO’s health emergencies programme, Mike Ryan, conceded that loss of US funding would hurt his department, adding: “This is going to be a major implication for delivering essential health services to some of the most vulnerable people in the world, and we trust that other donors will, if necessary, step in to fill that gap.”

On the delay in keeping its promise to health workers, Amibor said: “We are yet to hear from the federal government as regards payment of hazard allowance to healthcare workers. The MoU was for an initial period of three months. Effectively, it means we have till the end of May before the MoU would be rolled over. So, it is possible the government might be waiting till the end of May before paying the hazard allowance.

“In the same vein, government promised comprehensive insurance cover for about 5,000 frontline healthcare professionals involved in the control of COVID-19. That one, too, is also being awaited by healthcare workers.”

To Sokomba: “Even the hazard allowance review that was widely publicised has not been implemented. We are used to it- promises on paper.”

Also, National President of National Association of Nigerian Nurses and Midwives (NANNM) and Vice President of Nigeria Labour Congress (NLC), Abdrafiiu Alani Adeniji, said: “The federal government has not released any circular to the effect of meeting its promise on review of out hazard allowance and comprehensive life insurance.

“Without a circular, there cannot be any implementation in the Federal Civil Service.”

Secretary to the Government of the Federation (SGF), Boss Mustapha, had on Friday, April 23, during the daily Presidential Task Force (PTF) of COVID-19 briefing, said no fewer than 5,000 frontline health workers had been given life insurance by the Nigerian insurance industry.

Mustapha said the premium for the insurance has been fully paid in line with the principle of no premium, no cover.