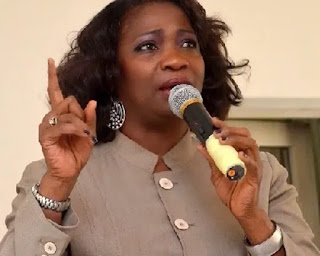 She claimed that the security personnel were instigated by Communication and Digital Economy Minister, Isa Pantami.

According to The Nation, the Chairman of the Nigeria Diaspora Commission (NIDCOM), Abike Dabiri –Erewa, on Saturday alleged that gun-wielding security agents chased staff of the agency out of an office duly allocated to it at National Communication Commission (NCC) annex building, Abuja by the federal government.

She claimed that the security personnel were instigated by Communication and Digital Economy Minister, Isa Pantami.

Dabiri-Erewa made the allegation on television while speaking on the challenges confronting the agency on the occasion of its first year anniversary.

She said: “As we speak, we don’t have office accommodation. Where we were allocated at NCC annex building, we were chased out by security operatives with gun within two days that we moved in on the orders of Hon. Minister of Communication and Digital Economy, Dr. Isa Pantami.’

She added: “I was away on official assignment with Mr. President in Addis Ababa when it happened and all my staff members were thrown into the street with all our gadgets, laptops, cameras and working tools trapped in there.

“Funny enough, the floor is still there unutilised till date. We hope after the COVID-19 pandemic lockdown, we shall retrieve all our property locked in by the Hon. Minister.”

“Despite all these challenges of paucity of funds and office accommodation, the commission has been waxing stronger in fulfilling its mandates.”

The ministry however said it was still preparing its response to the allegation when The Nation reached out to its official last night.