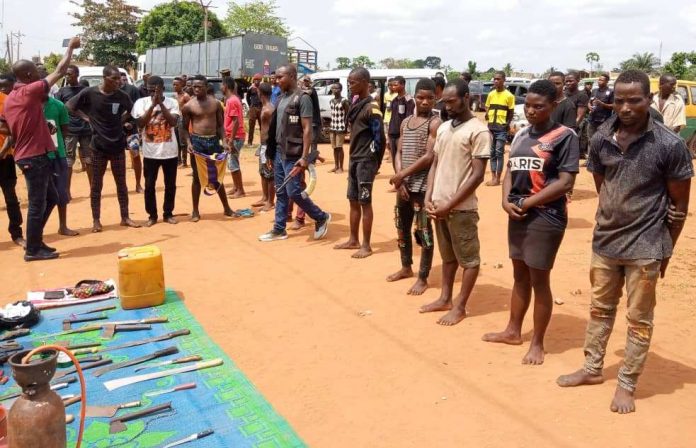 Waidi, a notorious known as Obasanjo, a suspected leader of a cult group, was hacked to death inside a church auditorium in the Ifako area of Lagos State, late on Sunday night.

Nigerian Tribune gathered that many people have lost their lives during superiority battles between members of Eiye and Aiye confraternities in Oworonsoki.

Three other persons suspected to be members of Eiye confraternity have been killed in reprisal attacks by members of Obasanjo’s group.

The renewed clash between the two cult groups is creating serious tension and panic among residents of Sawmill, Ifako and Oworonsoki.

A resident of the area who pleaded anonymity while speaking with the Nigerian Tribune said, “the major problem in Oworonsoki is cultism.”

The resident added that “more than 20 people must have been killed in the last one year in battles between members of the two major groups.”

He also continued that “Obasanjo used to be the leader of one of the two groups. He was on his way to Oworonsoki from Ifako when he was attacked by members of the rival cult group.”

Another resident, who simply identified herself as Tokunbo, said “they hit his vehicle and when he came down to check the extent of the damage, he was attacked with machetes and other dangerous weapons.

“He ran into a church on the expressway, but those people chased him there and continue to butcher him until they were satisfied that he was not going to survive it.”

The news of Obasanjo’s death instantly spread through the entire parts of Oworonsoki and members of his group went on reprisal attacks against their rivals.

Three people were reportedly killed between Sunday night and early Monday in the reprisal attacks by members of Obasanjo’s group.

The image maker in charge of the state police command, Bala Elkana, confirmed the death of two persons and the arrest of two suspects to the Nigerian Tribune.