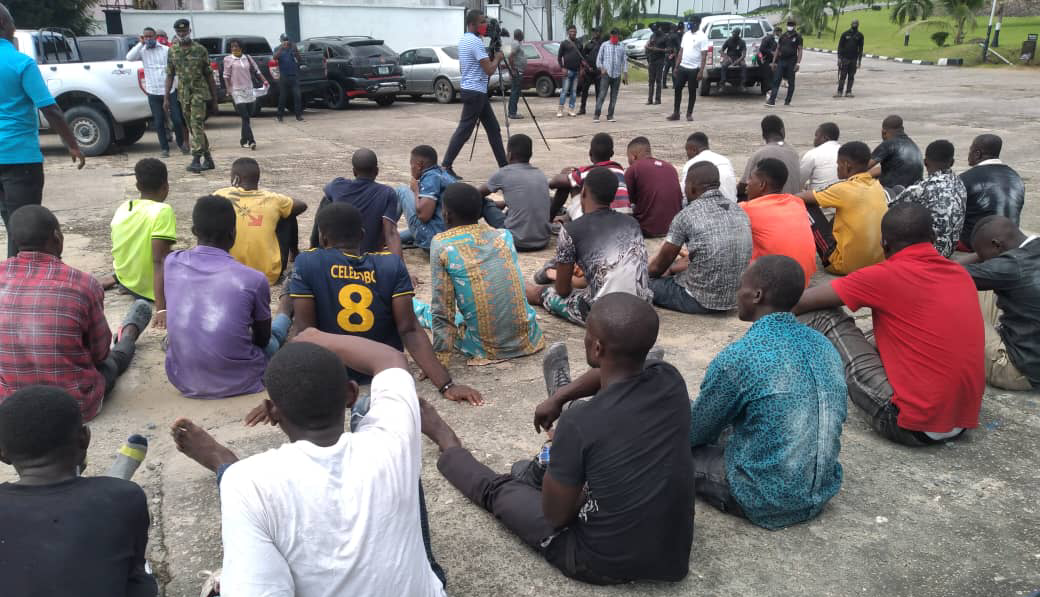 The Nigerian Navy Victory Ship (NNVS) has handed over 42 suspected cultists to the Cross River Government for onward investigation and prosecution.

Briefing newsmen on Tuesday in Calabar, the Commander of NNVS, Rear Admiral Vincent Okeke, said the suspects were arrested on Sunday through a tip off by concerned individuals.

Okeke, who was represented by Capt. Ibrahim Gwaska, said the Navy standby team was informed that the suspects were gathered in Akpabuyo local government area of the state for initiation and other activities.

According to him, intelligence gathering revealed that it was evidently clear that there was going to be a clash between the Klans and Black Axe confraternities.

“We are here to do a routine handover of 42 suspects to the Cross River Government representative.

“Accordingly, the base responded through a tip off and cordoned the area in Akpabuyo. In that raid, we arrested 61 suspected cultists.

“On arrival, preliminary investigations were been conducted and having concluded the investigation, 42 out of the arrested 61 persons were confirmed to be cultists accordingly.

“It is on this regard that we will be handing over the suspects to the state government and officials of the Anti-Cultism and Kidnapping Unit for onward investigation and prosecution,” he said.

In the same vein, on May 24, the navy also arrested a wooden boat laden with 130 drums of palm oil smuggled from Cameroon alongside 10 suspects

Esin, said that the Navy acted swiftly on the tip off that was given to them.

“As a state government, we are doing our best in ensuring that the issue of cultism is dealt with squarely.

“We are going to hand over the suspects to the relevant security agency for onward investigation and prosecution.

“For few days now, we have been on operation with other security agencies in making sure that all suspected cultists are arrested and prosecuted accordingly,” he said.

Esin thereafter, handed over the suspects to an official of the Anti-Cultism and kidnapping Squad, Mr Ogini Chukwuma for onward prosecution.