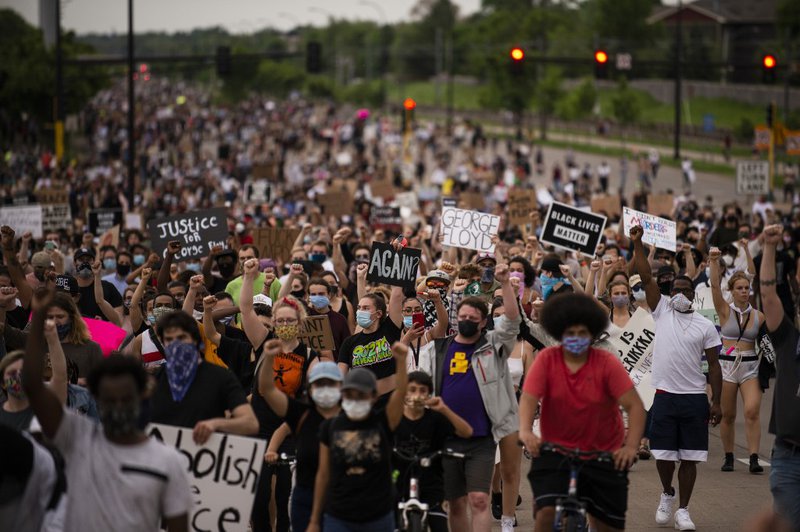 Demonstrators gathered Wednesday for a second night of protests in the US over the killing of a handcuffed black man by a policeman who held him to the ground with a knee on has neck.

As dusk fell police formed a human barricade around the Third Precinct in Minneapolis, where the officers accused of killing George Floyd worked before they were fired on Tuesday.

They pushed protesters back as the crowd grew, a day after police fired rubber bullets and tear gas on thousands of demonstrators angered by the latest seemingly needless African American death at the hands of US law enforcement.

President Donald Trump in a tweet called Floyd’s death “sad and tragic”, as outrage spread across the country over a bystander’s cellphone video of his killing on Monday while in the custody of four white police officers.

All four have been fired, as prosecutors said they had called in the FBI to help investigate the case, which could involve a federal felony civil rights violation.

“I would like those officers to be charged with murder, because that’s exactly what they did,” Bridgett Floyd, his sister, said on NBC television.

“They murdered my brother…. They should be in jail for murder.”

Minneapolis mayor Jacob Frey said he could not understand why the officer who held his knee to Floyd’s neck on a Minneapolis street until the 46-year-old restaurant worker went limp has not been arrested.

“Why is the man who killed George Floyd not in jail? If you had done it, or I had done it, we would be behind bars right now,” Frey said.

“Based on what I saw, the officer who had his knee on the neck of George Floyd should be charged,” he said.

The case was seen as the latest example of police brutality against African Americans, which gave rise six years ago to the Black Lives Matter movement.

Floyd had been detained on a minor charge of allegedly using a counterfeit $20 bill to make a purchase at a convenience store.

In the video, policemen hold him to the ground while one presses his knee to Floyd’s neck.

“Your knee in my neck. I can’t breathe…. Mama. Mama,” Floyd pleaded.

He grew silent and motionless, unable to move even as the officers told him to “get up and get in the car.”

He was taken to hospital where he was later declared dead.

Calls for justice came from around the country.

“It’s a tragic reminder that this was not an isolated incident, but part of an engrained systemic cycle of injustice that still exists in this country,” Biden said.

“We have to ensure that the Floyd family receive the justice they are entitled to.”

“This is not new, it has been going on a long time… what our communities have known for generations, which is discriminatory implementation and enforcement of the laws,” she said.

“He was begging to be able to breathe,” she said. “It was a public execution.”

The protests evoked memories of the riots in Ferguson, Missouri in 2014 after a policeman shot dead a young African American man suspected of robbery, as well as the case of New Yorker Eric Garner, who was detained by police for illegally selling cigarettes and filmed being held in an illegal chokehold by police that led to his death.

“How many more of these senseless excessive-force killings from the people who are supposed to protect us can we take in America?” said civil rights attorney Ben Crump, who was retained by Floyd’s family

Crump pointed out that the arrest involved a minor, non-violent crime, and there was no sign, as police initially claimed, that Floyd resisted arrest.

“There is no reason to apply this excessive fatal force,” Crump said.

“That has to be the tipping point. Everybody deserves justice…. We can’t have two justice systems, one for blacks and one for whites.”