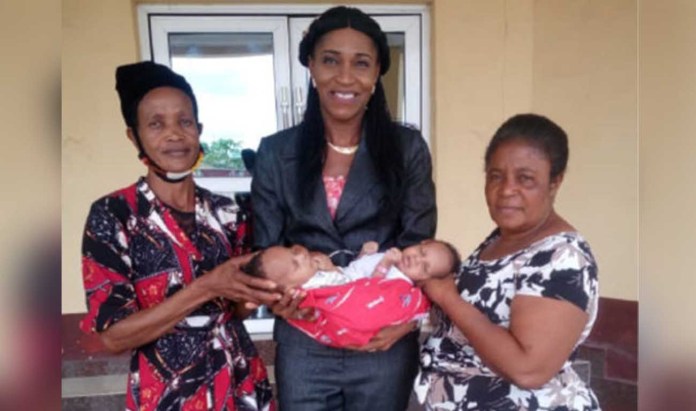 Anayochukwu Njoku, a taxi driver in Owerri, from Umuakagu, Agbahara Nsu in Ehime Mbano council area took to his heels and abandoned his wife when he realised that she gave birth to conjoined twins.

Njoku’s wife, Chidinma, was said to have given birth to the conjoined twins on March 11, 2020, but their sight was not something that Njoku could behold.

Sadly, Chidinma died 3 hours after the birth of her twin. In effect, the children were left on their own with nobody to claim them.

Fortunately, a government-owned foundation in the state heard of their plight and have now taken up the matter.

On 11 March 2020, Anayonchukwu who hails from Umuakagu, Agbahara Nsu in Ehime Mbano council area expected to welcome his new born into his family of six.

However, what he saw fell short of his high expectations, as his twin came out conjoined. To that effect, he took to his heels abandoning his wife, Chidinma, at the hospital. Chidinma subsequently died about three hours later, the same day.

Currently, the humanitarian organ of the Imo State government is working on separating the children and giving them a decent life.

“Presently, we have a family with conjoined twins. Their mother, Mrs. Chidinma Njoku died on 11th March, 2020 three hours after giving birth to them in a maternity in Umuokoto Nekede in Owerri West Local Government Area,” DailyTrust quoted a spokesperson of the Foundation, Chukwuma as saying.

“Their father, Mr. Anayochukwu Njoku, was helping his late wife in her tailoring shop to earn a living to support their poor family of six before the arrival of the conjoined twins, after he lost his job two years ago as a driver.

“By the special grace of God, as soon as the case got to the desk of Governor Hope Uzodimma, he gave an urgent directive for the twins to be brought to the Foundation for their adequate welfare and survival.

“So currently, we are reaching out to quickly get their surgery done so that they can begin to live a better life.

Chukwuma also called on goodwill persons to reach out to the children in any way they can.