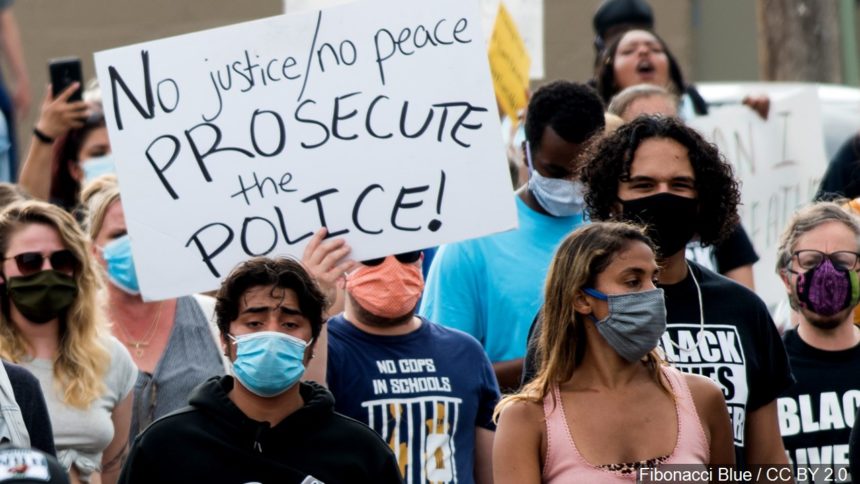 Protesters in the United States city of Minneapolis welcomed Friday’s murder charge against the white officer who knelt on the neck of George Floyd, an unarmed black man, but demanded the three other officers involved be arrested as well.

“It’s an absolute outrage because it isn’t just one officer who is responsible for the murder of George Floyd,” said Ayaan Dahir, a Minneapolis resident and activist. “They all need to be arrested and charged.”

Floyd died on Monday after policeman Derek Chauvin pinned him to the ground as he repeatedly pleaded: “I can’t breathe.”

An eight-minute video of the incident shows bystanders urging Chauvin to get off of Floyd, but the officer continues to pin him down even as he goes motionless.

Chauvin, who was fired after the incident, was arrested on Friday, more than three days after Floyd died. He was charged with third-degree murder and manslaughter.

According to the charging documents, Chauvin’s knee was on Floyd’s neck for eight minutes and 46 seconds, including nearly three minutes of which Floyd laid on the pavement motionless.

“We have evidence, we have the citizen’s camera’s video, the horrible, horrific, terrible thing we have all seen over and over again, we have the officer’s body-worn camera, we have statements from some witnesses,” said Hennepin County Attorney Mike Freeman in announcing the charges.

Three other officers involved were fired but have not been charged, angering protesters and community leaders who have demanded all four officers be held accountable.

“The unfortunate situation here is that because police are involved, the law protects them as well as the system,” said Jaylani Hussein, the director of the Minnesota chapter of Council on American-Islamic Relations.

“If they didn’t listen to George’s cries for help, they should have listened to the bystanders who were there witnessing this unfortunate situation,” Hussein told Al Jazeera. “All four need to be arrested and offered no bail.”

The killing of Floyd has set off angry protests in Minneapolis and in major cities across the US.

Protesters in Minneapolis rallied on Friday night, despite a city-imposed curfew that began at 8pm (01:00 GMT).

Some protesters said they will continue to defy the curfew until all the officers involved in Floyd’s death are arrested, local media reported.

“They can’t arrest us all,” one protest leader was quoted as saying.

The Minnesota Freedom Fund, an organisation that pays bail for low-income individuals who are arrested, encouraged protesters planning to stay past curfew to write the group’s and partner group’s phone numbers on their arms in case of arrest.

Friday’s curfew, which will last until 6am (11:00 GMT) on Saturday and begin again later that night, was announced after three nights of protests rocked Minneapolis, with thousands taking to the streets to demand justice for Floyd and an end to police violence.

While the protests started peacefully, they descended into chaos, with fires and looting. Police have responded to protesters with tear gas and non-lethal projectiles. Protesters also say police have antagonised them even when they are marching peacefully. At one point a cable television crew was arrested – an incident for which authorities later apologised.

On Thursday night, officers retreated from a police precinct as protesters overran the building, chanting, “no justice, no peace”. Some set fires in the building. Protesters rallied outside a different police building on Friday, a livestream by Unicorn Riot, an independent media organisation showed.

“It’s very clear that there is a lot of anger, not just about the death of George Floyd, but all the people who have been killed by police,” Dahir told Al Jazeera.

Responding to the violence, Minnesota Governor Tim Walz declared a state of emergency and dispatched the National Guard to the city. National Guard members could be seen in Minneapolis and neighbouring Saint Paul by mid-Thursday.

In addition to charges brought against all the officers, protesters are also demanding a special prosecutor be named in the case, saying they do not trust Hennepin County Attorney Freeman and pointing to the fact it took more than three days for an arrest to be made.

“That arrest of the officer should have happened since day one. And everything that has happened since, I hold Mike Freeman directly responsible,” Dahir said.

“What’s been happening – this uprising, this rebellion – is something that organisers have been saying for years was going to happen eventually,” Dahir said. “This isn’t something that can be undone. It’s not an accident, it’s not a coincidence, it is something that has been brewing for a long time and this is the straw that broke the camel’s back.”