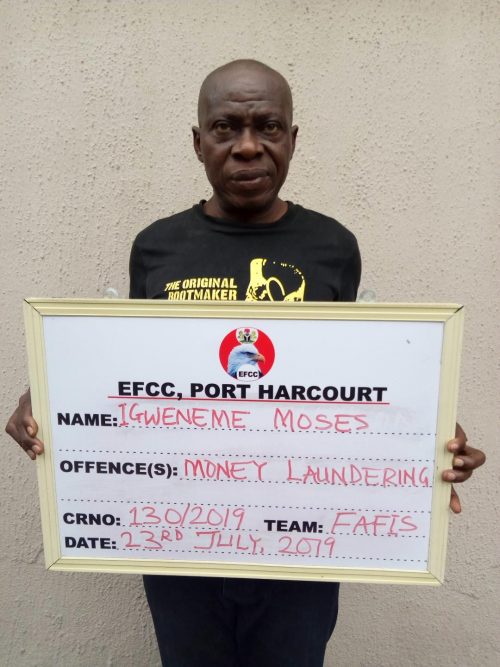 Almost ten months after been arraigned in court by the Economic and Financial Crime Commission (EFCC), Igweneme Moses, an International Romance Scammer, finally admitted that he committed fraud.

Igweneme Moses, a.k.a Griffith Doyle, made the admission at the resumed hearing of the case on Thursday. He was first docked on 23 July 2019.

Justice Mohammed sentenced him to one year imprisonment for conspiracy and money laundering.

The convict will also refund $240,000 to his victim, Chantai Helene Meadery, a Swiss. Moses who committed the scam with his daughter, Nkeiruka Blessing has refunded $100,000 already.

Moses defrauded Meadery in February 2018 through a dating scam, with a promise of “building a future together” in Switzerland.

The EFCC charged him with 4-counts of obtaining money by false pretence and money laundering.

One of the counts reads: “That you Igweneme Moses and Igweneme Nkeiruka Blessing (now at large)between the 13th and 26th March, 2018 directly took possession of the sum of $82,706,(Eight Two Thousand, Seven Hundred and Six US Dollars) which you knew or reasonably ought to have known is the proceeds of an unlawful act, to wilt: obtaining under false pretence from one Chantai Helene Meadery and thereby committed an offence contrary and punishable under Section 15(2) of Money Laundering(Prohibition) Act, 2011 (As amended)”. The defendant initially pleaded “not guilty”.

In the course of the investigation, it was discovered that the convict used the pretext of fake emergency situations, to trick his victim in making a total of sixteen (16) transfers amounting to Two Hundred and Forty Thousand, Seven Hundred Dollars ($240,700) to the convict.

The convict received all the money through his UBA account number 30020624272, a domiciliary joint account belonging to him and his daughter, Igweneme Nkeiruka Blessing. Further investigation also revealed that any time the domiciliary account was credited, Moses transferred the funds in United States dollars to a bureau de change operator who will then transfer the Naira equivalent to his daughter via UBA Naira account No. 2064404530.

Upon his guilty plea, the prosecuting counsel, T. M. Iko, urged the court to convict the defendant as charged and order the restitution of the total sum of Two Hundred and Forty Thousand US Dollars ($240,000) to the victim.

Justice Mohammed consequently convicted Moses and sentenced him to one year imprisonment and ordered total restitution of the sum of Two Hundred and Forty Thousand US Dollars ($240,000) to the victim.

The convict has so far returned the sum of One Hundred Thousand US Dollars (S100, 000) to the victim.