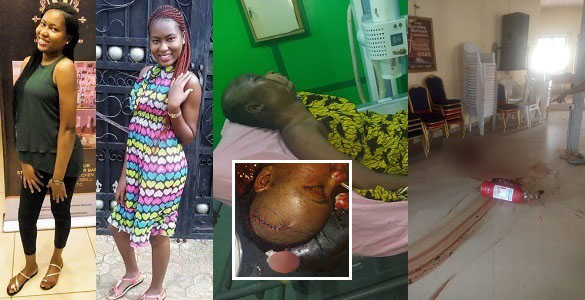 Vera Uwaila Omozuwa, a 100-level Microbiology student of the University of Benin, UNIBEN was reportedly raped and battered inside a church in Edo state.

According to reports from her friends on Social Media, Vera was molested on the 29th of May, 2020 inside a church, near Ikpoba Hill in Benin City.

According to reports, on the said day, Vera had gone into the church to read, whist preparing forr a possible school resumption after several months of staying at home, due to the lockdown order in the country.

This will be the best song you’d listen to today: Kayode – Sideguy – Click Here

While reading on the said date, her attackers ambushed her right inside the church, raped her and smashed her head with a fire extinguisher, leaving her for dead.

According to a source, “The church’s security officer had gone to collect the keys to the church from its keeper when he was told that there was someone in the church already.

He got to the church only to find Uwaila in a pool of blood and next to her was the fire extinguisher which was used to bash her face.

He ran back to inform the key keeper and his wife, who went to the church to meet her lifeless, thinking she was dead. After careful observation, they noticed she moved her hand and quickly rushed her to the hospital.

It was at the hospital that Uwaila revealed she was reading all alone when some unknown men came into the church, beat, raped and hit her head with a fire extinguisher. However, she later passed on.

The case was eventually reported to Oregbeni Police Station, but nothing has been done about it so far. Her friends and family have now taken to social media to demand action, using the hashtag #JusticeForUwa.

A family source, who confirmed the development, described the deceased as “an easy-going somebody (sic).”