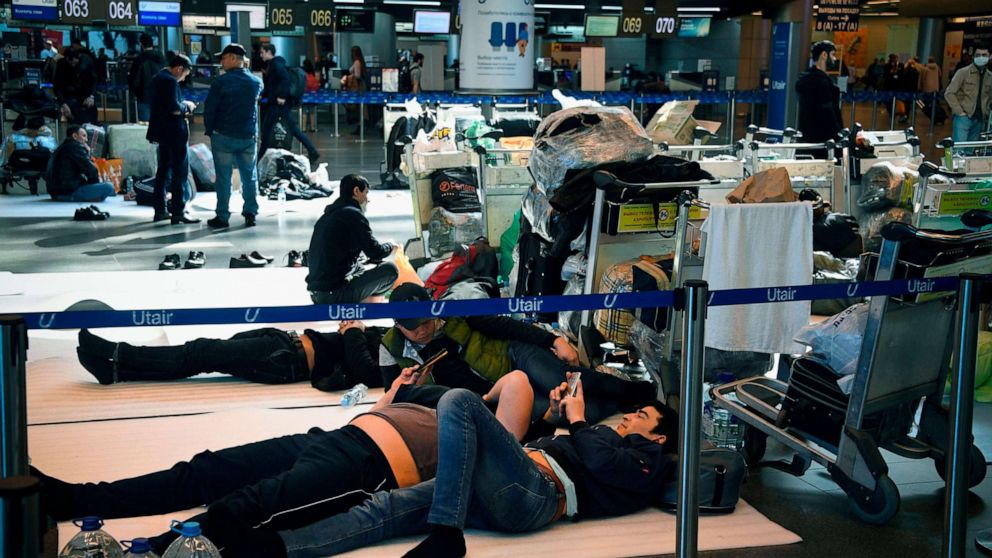 Zarina Ermyrzayeva lived in a two-bedroom apartment in Moscow with nine other people, all immigrant workers from Central Asia.

In late April, she and several of her roommates tested positive for novel coronavirus after falling severely ill with pneumonia symptoms. After a week in the hospital, they returned to the apartment.

For over a month following, they were unable to leave. Quarantine rules forbade them from stepping outside, even to buy groceries. Unable to work and with no money to get deliveries, their food ran out.

“We don’t know who to appeal to,” Ermyrzayeva said in video message after 20 days locked in the apartment. With 10 people to feed, they had only a few kilos of flour and some oil left, she said.

The lockdowns imposed by the pandemic have made life precarious for many, but for millions of migrant workers in Russia, it was an overnight catastrophe, leaving them not just without jobs, but for huge numbers almost immediately without any source of food.

An estimated 11 million migrants live in Russia, according to the International Organization for Migration (IOM). In 2019, 5 million of these were from the former Soviet countries of Central Asia, Kyrgyzstan, Kazakhstan, Tajikistan, Uzbekistan and Turkmenistan. Most of these immigrants do low-paid, manual jobs, working on construction sites, warehouses and markets and as cleaners and restaurant workers.

As the pandemic intensified in mid-March, Russia and the Central Asian countries closed their borders, stranding thousands of migrants. Hundreds found themselves trapped at Russian airports, sleeping among the baggage counters, after their flights were indefinitely canceled.

Many migrants were already living on the breadline, without savings and with unsecured jobs. When the lockdowns began, many of those jobs vanished instantly, without compensation and with no hope of even temporary support from employers.

With no right to Russian state support, which in any case can be difficult and slow to access for Russian citizens, people were left with only enough money to pay for a few days’ food and the prospect of losing their accommodation.

The scale of the problem is enormous. The numbers of people left without any source of income and now struggling to feed themselves is in the millions, according to the IOM. Its representative in Russia, Abdusattor Esoev, estimated that 60% of migrants are unable to pay their rent and more than 40% to pay for food. This month the IOM launched an urgent appeal for $7 million to help migrants in Russia and Central Asia.

Many workers’ families in their home countries also rely on the money the migrant workers send back. The World Bank estimates that remittances will fall globally by 20% this year, amounting to around $110 billion.

A small number of charities like Chupik’s have been trying to collect food for people, relying on private donations to buy it from supermarkets and then distribute it.

Gulzina Mamatakhunova, who runs the small charity, Migrant Development Fund, said she had received 30,000 appeals for help in less than a week in the early days of the lockdown. Dom Dobroty, one of the largest charities collecting food, said it had so far distributed more than 150,000 tons of food to around 30,000 people.

But the amount of aid the charities, which have been relying on private donations, can provide is dwarfed by the need. Russia’s government and the migrants’ home countries have given little support. Although Central Asian countries have organized some charter flights back, most of their citizens have been left to fend for themselves.

Many migrants live in overcrowded apartments or else hostels, where dozens of people are crammed into largely unfurnished dormitories, sleeping on bunkbeds. In cities like Moscow, where the lockdown was strict, people have been confined to these places, not even permitted to go more than 100 meters from them for exercise.

One of the toughest situations is for those like Ermyrzayeva where someone tests positive for COVID-19. Russian authorities have applied a strict policy to the hostels where migrant workers live, whereby if even just one person tests positive the whole building is quarantined. That means no one is permitted to leave for two weeks, even to buy food.

In practice that means dozens of people locked in, in conditions where social distancing is virtually impossible, effectively waiting to get sick. The clock on the two-week period is also reset each time a new person tests positive, meaning in reality people have been finding themselves sealed in the buildings for weeks longer.

“It’s not even just that they can’t work,” said Chupik. “They can’t receive money transfers, they can’t buy food, they can’t buy medicine. The only thing left for them to hope for is help from a charity like ours.”

Nurila Alymkulova and the 11 others in her building have been relying on a food package from Chupik. An experienced nurse in Kyrgyzstan, in Moscow she works as a cleaner. Medics came to the apartment to test Alymkulova and the others after some fell sick. Although she had few symptoms, Alymkulova alone tested positive (Russia has struggled with ineffective tests), but everyone in the house was still quarantined.

“I’m kind of, kind of humiliated in front of my countrymen,” Alymkulova, 53, said by phone, crying, saying she felt guilty. “Imagine a healthy person lying at home depending on everyone.”

In mid-April, president Vladimir Putin signed a decree relieving migrants from paying permit fees required to work and automatically extending their visa. The decree suspended the fees until mid-June, but in reality many employers are reportedly still requiring people to pay them.

Russia has begun easing its lockdown, with Moscow due to relax its next week. From then small shops will re-open and buildings sites already are. Some migrants will be able to return to work.

But there are worries that the economic damage caused by the lockdown will mean many migrant jobs will no longer be there. According to figures released this week, Russia’s unemployment for April was up 21% from last year.

Dinara Sadretdinova, co-founder of Dom Dobroty, said she believed it would ease the situation but said she expected they would still need to be providing food for large numbers of people.

Ermyrzayeva said despite the difficulties they were determined to follow quarantine, having seen the virus’ impact while in hospital.

“If young people can cope with it, older people can’t cope—and so, however it goes, work is already second for us. The most important thing is not to infect other people,” she said.