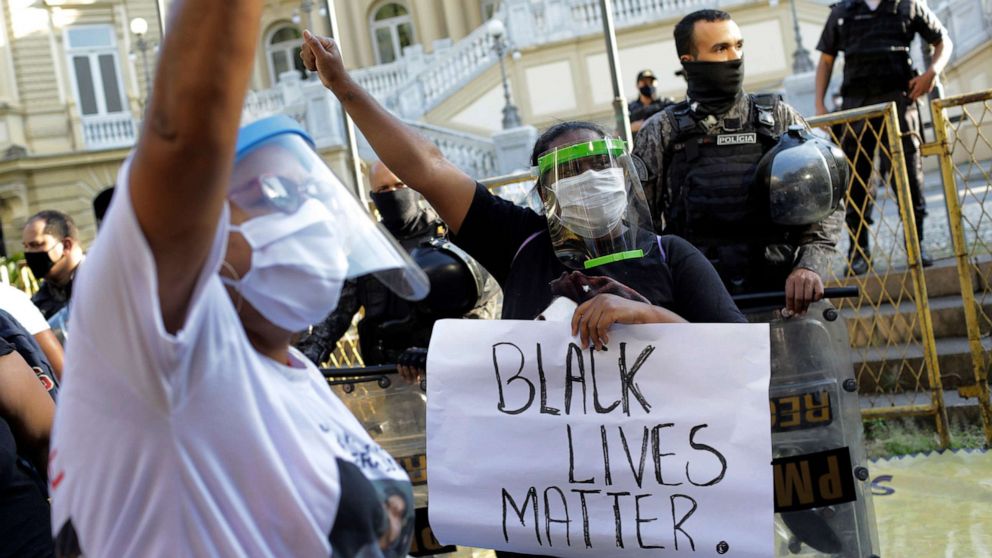 Hundreds of demonstrators were seen chanting and carrying Black Lives Matter signs outside a number of U.S. embassies in Europe and across the world over the weekend, as the protests against the killing of George Floyd spread internationally.

On Saturday and Sunday, crowds gathered outside the U.S. embassies in London and Berlin to protest against the death of Floyd and show solidarity with the protests in the U.S. with chants of “I Can’t Breathe” a regular feature of the weekend demonstrations.

In London, hundreds took part in a “Black Lives Matter” demonstration beginning with protesters taking a knee for nine minutes in Trafalgar Square before marching onto the U.S. Embassy.

“Well, we’ve seen for hundreds of years black people and people of color be absolutely abused and killed on the streets and it’s just getting worse and worse,” one London protester said. “We’ve had enough, and if they’re not going to listen we’re just going to scream louder and louder.”

London’s Metropolitan Police announced they arrested 23 people for “various offenses” across the U.K. capital on Sunday, and said they were on hand to make sure crowds complied with social distancing regulations.

Two black soccer players in Germany referenced the protests after scoring goals in weekend games. Jadon Sancho, an English player for Borussia Dortmund, wore a shirt underneath his jersey saying “Justice for George Floyd.” Marcus Thuram took a knee after scoring a goal for Borussia Mönchengladbach in tribute to the U.S. protests.

In Canada, thousands took to the streets in Vancouver and Montreal, echoing the chants heard across the U.S. in mostly peaceful protests Sunday. In the Montreal gathering, crowds were dispersed after projectiles were thrown at the police later in the evening.

And in Rio de Janeiro, Brazil, crowds chanting “I Can’t Breathe” were dispersed by police in riot gear outside the state government palace on Sunday as anti-government protests against police brutality in Brazil fed off the global sentiment felt by the killing of Floyd.

Last year in Rio up to 1,402 people between January and September were killed by police, particularly in operations in the favelas, according to Human Rights Watch.

In Iran and China, two countries which the U.S. has been heavily critical of human rights abuses, state run media and foreign ministers criticised the American handling of the George Floyd protests.

Manslaughter charges have been brought against Derek Chauvin, the white police officer accusing of kneeling on Floyd’s neck for nine minutes, and tthe National Guard has been activated in Minneapolis and 17 states.