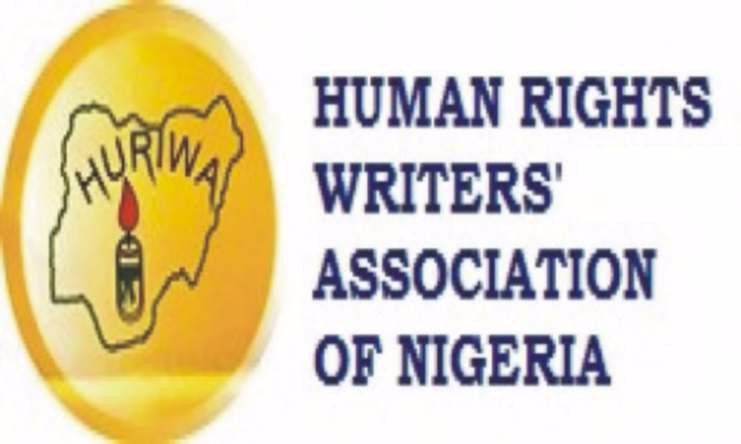 The Human Rights Writers Association of Nigeria (HURIWA) has described the reported reorganization of the Nigerian Police Force as cosmetic and deceptive.

The Rights group said there is clearly an absence of the required political will and the will power on the part of the Federal Government including the National Assembly to design and implement the best kind of emphatic, comprehensive and strong constitutional reforms of the Nigerian Police beginning with the passage of relevant amendments to decentralize the command and control structures of the Police for greater efficiency and enhanced effectiveness in law enforcement at all tiers of government in Nigeria.

HURIWA lamented that the President reportedly jettisoned the amendments made by the last session of the National Assembly in which state police was created, adding that it is unlikely that such reforms can be spearheaded by a lackluster leadership in the current session of the National Assembly that has evidently convinced Nigerians that it is a stooge of President Muhammadu Buhari and may not be ready to take the bull by the horn.

HURIWA also lamented that the current National Assembly’s leadership has even discontinued the implementation of the Constitutional amendment that makes any Constitutional alteration that has been completed to become law without the requirement of Presidential assent.

“The recently unveiled so-called major reorganization of the Nigerian Police Force as approved by the President in which case additional zones were carved out from the existing zones and some top-flight police officers re-assigned to head these newly upgraded policing centres is only but a mere scratch on the hard surface of a giant operational and personnel incapacitation of a policing institution that has outlived her usefulness and requires a much more fundamental restructuring and reforms to bring the Police in tune with the twenty-first century compliant global best practices, ” it said.

In a statement signed on Wednesday in Abuja by the National Coordinator, Emmanuel Onwubiko and the National Media Affairs Director, Zainab Yusuf, HURIWA restated her often-stated position that the way the police is structured at the moment with a centralized command and control that is directly under the purview of only Mr. President, the ability, capacity and competency of the policing institution will continue to have setbacks and would be sabotaged by internal factors such as lack of merit and professionalism in the enlistment and appointments of heads of the Nigerian Police Force at the different levels beginning from the national to the state structure which still has its umbilical cord tied to the President of the Federal Republic of Nigeria.

HURIWA reminded the federal government that for over half a century that the country has operated under the strict nationally centralized command and control structures of the police, the sophistication, spread and daredevilry of divergent armed groups of robbers, kidnappers, terrorists, mass murderers and armed herdsmen with the attendant violent and blood cuddling attacks with high tolls in terms of casualties and the extensive destructions of communities all across the country which are progressively on the increase has shown that the current policing formula captured by the 1999 constitution as amended has failed and is in need of fundamental restructuring which a piecemeal approach like the reorganization that has just been done can not possibly achieve.

READ  VIDEO: “We Have Not Been Paid Tuition For One Year”, NDDC Scholarship Beneficiary Makes Shocking Revelation

HURIWA said: “Federal Government under President Muhammadu Buhari is embarking on mere ‘patch patch’ work or little by little damage control of the extensive collapse the Nigerian Police Force has faced and which has manifested in a monumental dimension with the sacking and destruction of several communities and killings by unidentified gunmen and in some cases by suspected armed Fulani herdsmen without the Nigerian police taking steps to even prevent these calamities and killings from taking place in the first instance and when they do happen, the Police are unable to investigate arrests and prosecute these offenders.

“As it is now, there are hundreds of persons with blood in their hands who have escaped the full wrath of the law because of the operational collapse and incompetence of the Nigerian Police Force. Appointing Deputy Inspector General of Police to take charge of zones is not the way out.

“The way out is too decentralized the command and control platforms of the Nigerian Police Force by creating State and local policing institutions to complement the National policing infrastructure. The State and local police should be autonomous on operational mechanisms and must be staffed by the most competent professionals and these newly legislated policing platforms should be well equipped and supervised efficiently to discharge their mandate of protecting lives and property of citizens in their areas of jurisdiction”.

HURIWA recalled that the Federal Government has just approved what the government calls reorganization of the Nigeria Police with the creation of an additional department, five Zonal Commands, and granting full autonomy to the Force Intelligence Bureau (FIB).

The Force Public Relations Officer (FPRO), DCP Frank Mba disclosed this in a statement that said the Federal Government also approved the decentralization of the Force Criminal Intelligence and Investigations Department (FCIID).

HURIWA however, dismissed this so-called reorganization as an attempt to keep doing the same thing the same way and expect a different outcome.

“HURIWA is appealing to the government to go all out in carrying out far-reaching legal reforms that will usher in a rebranded, efficient, and effective security architecture that will see the command and control of the Nigerian Police Force decentralized in the real sense of it.

“Only an insane person will continue to do things the same way and expect any revolutionary change or result. The only guarantee to a secured nation is for the current Policing institution to be unbundled and restructured in a fundamental way, ” the statement added.