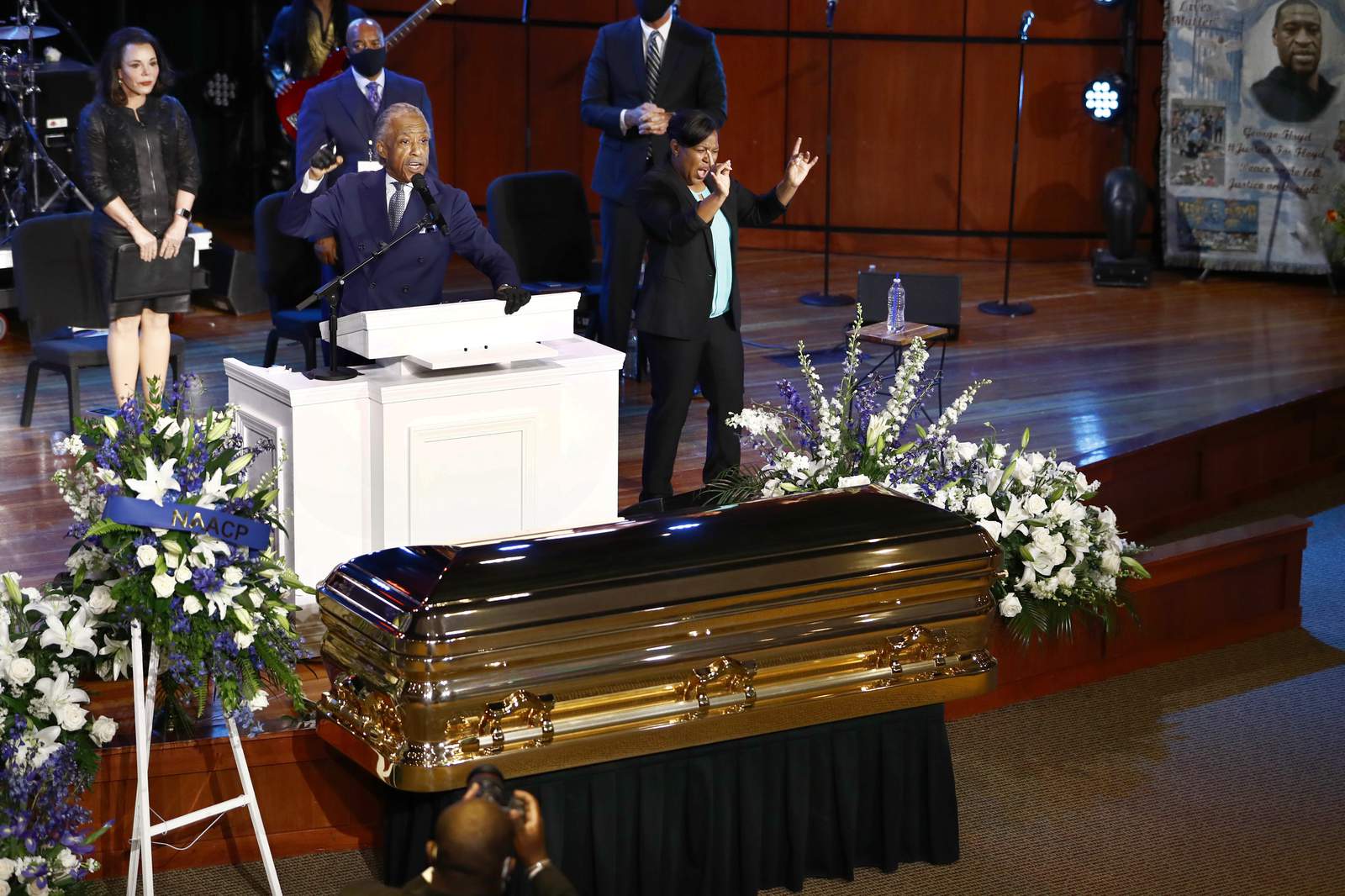 Hollywood celebrities, musicians and politicians gathered in front of the golden casket of George Floyd at a fiery memorial Thursday for the man whose death at the hands of police sparked global protests, with a civil rights leader declaring it is time for black people to demand, “Get your knee off our necks!”

The service – the first in a series of memorials set for three cities over six days – unfolded at a sanctuary at North Central University as a judge a few blocks away set bail at $750,000 each for the three fired Minneapolis police officers charged with aiding and abetting murder in Floyd’s death.

Floyd, a 46-year-old out-of-work bouncer, died May 25 after a white police officer, Derek Chauvin, put his knee on Floyd’s neck for several minutes as he lay handcuffed on the pavement, gasping that he couldn’t breathe. Chauvin has been charged with murder, and he and the others could get up to 40 years in prison.

From coast to coast, and from Paris and London to Sydney and Rio de Janeiro, the chilling cellphone video of Floyd’s slow death has set off turbulent and sometimes violent demonstrations against police brutality, racism and inequality.

“George Floyd’s story has been the story of black folks. Because ever since 401 years ago, the reason we could never be who we wanted and dreamed to be is you kept your knee on our neck,” the Rev. Al Sharpton said in a fierce eulogy. “It’s time for us to stand up in George’s name and say, ‘Get your knee off our necks!’”

READ  Abandoned Baby Found By The Roadside In Akure (photos)

Sharpton vowed a movement to “change the whole system of justice.”

‘I can breathe now’

“All these people came to see my brother,” Philones Floyd told the crowd at the memorial in awe as he recounted their childhoods playing catch and eating banana-mayonnaise sandwiches. “That’s amazing to me that he touched so many people’s hearts because he touched our hearts.”

The casket was flanked by white and purple flowers, and a vibrant image was projected above the pulpit of a mural of Floyd painted at the street corner where he was seized by police on suspicion of passing a counterfeit $20 bill at a convenience store. The message on the mural: “I can breathe now.”

The sanctuary normally seats 1,000, but because of the coronavirus outbreak, the capacity was reduced to about 500, and mourners wore masks.

After the Minneapolis event, his body will go to Raeford, North Carolina, where he was born, for a public viewing and private family service on Saturday.

Next, a public viewing will be held Monday in Houston, where he was raised and lived most of his life. Then a 500-person service will take place Tuesday at the Fountain of Praise church.

The farewells for Floyd come as demonstrations around the globe continue.

“It’s a solidarity question. We stand with our brothers, internationally, our sisters as well, but the same thing is happening here. It’s no different,” Isaak Kabenge said in Stockholm.

In the U.S., where protests had been marked by bouts of lawlessness earlier in the week, relative quiet continued for a second straight night Wednesday following a decision by prosecutors to charge the three other Minneapolis officers at the scene and file a new, more serious count of murder against Chauvin.

Meantime, in Georgia, a white father and son charged in another killing of a black man that has raised racial tensions in the U.S. made a court appearance Thursday via video. A state investigator testified that Travis McMichael was heard uttering a racist slur as he stood over the body of Ahmaud Arbery after killing him with three blasts from a pump-action shotgun.

The new charges in Minneapolis punctuated an unprecedented week in recent American history, in which largely peaceful protests took place in communities of all sizes but were rocked by bursts of violence, including deadly attacks on officers, theft, vandalism and arson. In Minneapolis alone, more than 220 buildings were damaged or burned, with damage topping $55 million, city officials said.

Nationwide, more than 10,000 people have been arrested, an Associated Press tally found. More than a dozen deaths have been reported, though the circumstances in many cases are still being sorted out. READ  13-year-old Girl Born Out Of Incest Impregnated By Her Father, Ugochukwu Nwonwu In Abia
Share this Post[?]