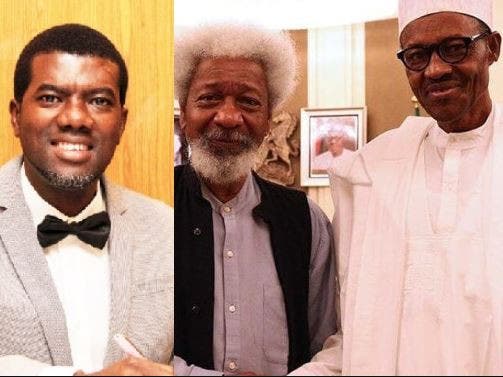 Former President Goodluck Jonathan’s spokesperson, Reno Omokri, has called on Nobel Laureate, Wole Soyinka, to apologise to President Muhammadu Buhari for claiming he is not in charge of Aso Rock.

Recall Soyinka in his statement against the President had said, “I have said this before. I do not believe there is really anybody in charge in Aso Rock.”

“I have been studying the trend over the past year and a half, and I believe this president is not in charge of this nation, in so many aspects and directions.”

Omokri in his reaction to the statement noted that Soyinka should not complain about President, he added that he should apologize and live out the rest of his years, preserving his legacy.

He wrote: “Wole Soyinka should not complain about General @MBuhari.”

“He should accept responsibility for bringing the worst ruler in Nigeria’s history of power.”

“He should thereafter apologize, and honourably bow out and live out the rest of his years, preserving his legacy.”