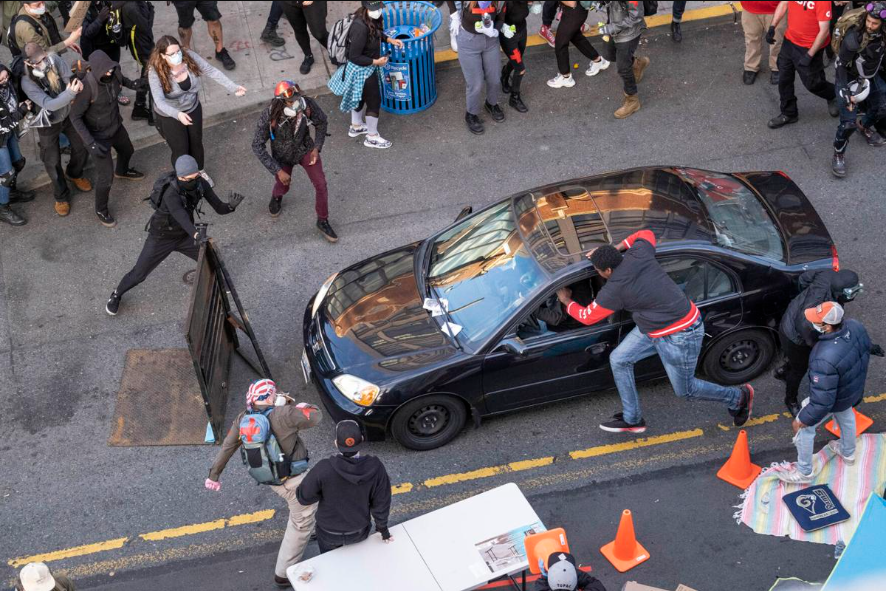 A yet-to-be identified gunman reportedly drove into a protest, brandishing a gun at protesters and shooting one of them in the process.

According to report, the man drove through a barricade in Seattle, ploughing into crowds of Black Lives Matter protesters.

The gunman’s car was surrounded by the protesters to stop him from moving further but he exited the car with a gun.

Eyewitnesses claim the man headed towards a crowd of protesters in the city’s Capitol Hill district before getting out of the car, brandishing a gun on Sunday, June 7.

“He exited his car and flashed a gun,” a man tweeted with footage of the incident.

“The police say they have the man in custody and have the gun.

“They asked for anybody who is hurt to come to the barricade. A man was on the ground on 11th and Pine. He’s up now.”

A 27-year-old man suffered a gunshot wound and was taken to the hospital in stable condition.

A photo shared online shows him being moved from the scene.

A number of other people were reportedly injured at the scene.

The victim said he saw the car coming down the street and pursued it to try and protect the crowd. The man said he punched the driver before being shot.

As for the gunman, he surrendered to the police after protesters caught up with him.

Twitter users reacted by pointing out that even though the man had a gun, police officers did not shoot him or use a taser on him.

Meanwhile, Portland Police have warned that despite protests being peaceful, some people are still coming armed. They shared a photo of a weapon seized, a knife that had been attached to an umbrella.