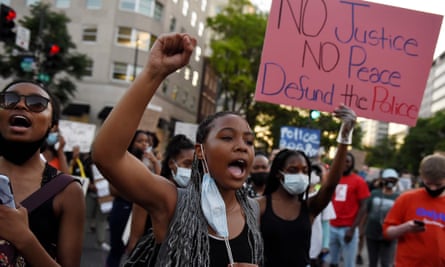 Weeks after George Floyd was allegedly killed by a white police officer, the Minneapolis city council has pledged to disband the Minneapolis police department and replace it with a new system of public safety.

This is coming after calls to defund law enforcement are sweeping the US following the killing of George Floyd and other black people who died due to police brutality.

A majority of council members while speaking at a community rally on Sunday, June 7 declared their intent to “dismantle” and “abolish” the Minneapolis police department responsible for George Floyd’s death and build an alternative model of community-led safety.

The decision is a direct response to the massive protests that have been taking place in American cities in the last two weeks. It is also a major victory for abolitionist activists who have long fought to disband police and prisons.

“This is a moment that’s going to go down in history as a landmark in the police and prison abolition movement,” said Tony Williams, a member of MPD150, a Minneapolis group whose literature on building a “police-free future”” has been widely shared during the protests. “There’s a groundswell of support for this. People are grounded in the history of policing in a way that has never happened before. It’s visible that police are not able to create safety for communities.”

According to The Guardian, the council members are expected to face opposition from law enforcement officials and the police union, though activists emphasize that the veto-proof majority has the authority to move forward regardless of opposition.

On Saturday, June 6, Minneapolis mayor, Jacob Frey was booed at a demonstration when he wouldn’t commit to abolishing the police. Protesters shouted, “Go home, Jacob!” and “Shame!” until he left.

Speaking at the event, Lisa Bender, the Minneapolis city council president, said: “In Minneapolis and in cities across the US, it is clear that our system of policing is not keeping our communities safe,. Our efforts at incremental reform have failed, period. Our commitment is to do what’s necessary to keep every single member of our community safe and to tell the truth: that the Minneapolis police are not doing that. Our commitment is to end policing as we know it and to recreate systems of public safety that actually keep us safe.”