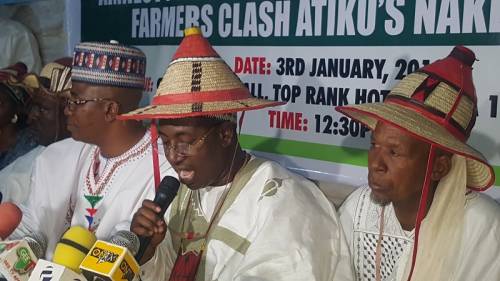 National President of the Miyetti Allah Kautal Hore, Alhaji Abdullahi Bello Bodejo has debunked a statement in which it purportedly said that Nigeria belonged to the Fulani.

The sociocultural organisation disclosed this in a statement on Sunday, June 7.

Bodejo was quoted to have said, “Nigeria is a Fulbe country and the Fulbe can enter anywhere without permission.

“And the Fulbe are also raising 100,000 militiamen to enforce their will on every community in this country.”

However, the Miyetti Allah described the claim as a blatant fabricated lie concocted to portray the group in a bad light and smear the image of Fulani people.

“I want to state clearly and unequivocally that this news report is a blatant fabricated lie. It is actually the enemies of the Fulbe people that are at it again, as always, concocting such insidious and malicious falsehood against our people for their diabolical agenda against the Nigerian state.

“No doubt I was asked by the Sun Newspaper to react on the formation of Amotekun and my response was that every ethnic group has the inalienable right to defend itself against any aggression, including the Fulbe. That Fulbe will pursue their legitimate business anywhere in Nigeria as the country is as much their inheritance as it is of other groups.

“I further said the Fulbe will also form their vigilante groups if necessary to ward off any threat against our people and against the incessant cattle rustlings that our people have been suffering for decades without respite from government and other communities.

“For example, more than 804 Fulbe were murdered in cold blood in June 2017 and more than 10,000 of their cattle killed by Mambila militias in Taraba State, the continuous killing of our people and stealing and rustling their cattle in Plateau, Southern Kaduna, Benue, Zamfara with no arrest against the perpetrators,” Bodejo said.

“This is essentially what l said to the Sun Newspaper. But I am surprised that I did not see this report on the media I spoke to but it went distortedly viral on some other social media. Miyetti Allah refutes this news report and condemns the inherent mischief by the enemies of the Fulbe for this diabolical act. With or without Miyetti Allah, the Fulbe have the ability, capacity and right to defend themselves in Nigeria and indeed anywhere. Let those who wish this our great country ill to look for other means but leave the Fulbe alone. We have enough of our problems without adding salt to injury.”