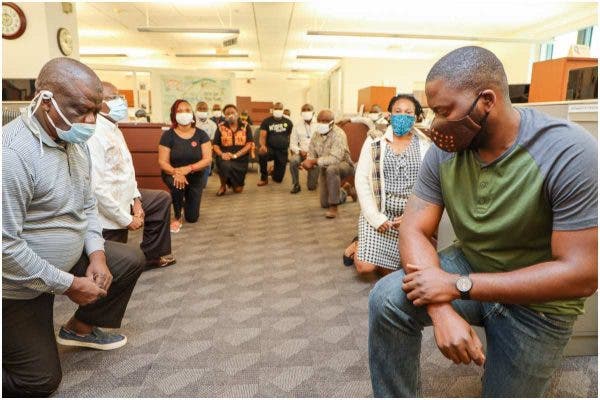 The staff members of the United States Embassy in Abuja, Nigeria, went on one knee on Monday to show support for the Black Lives Matter protesters who are demanding justice for George Floyd and other black victims of police brutality in the US.

George Floyd was an unarmed black man who died after a Minneapolis police officer kneed on his neck for more than eight minutes as he told them “I can’t breathe”.

Floyd’s death has sparked mass protests across the US, with governors in several states calling in National Guard troops in an attempt to maintain order.

The United States Embassy staff in Nigeria earlier today expressed support for the protests that have rocked the US.

The embassy posted a photo of its staff going down on one knee, a gesture that shows support for the ‘Black Lives Matter’ movement and it wrote:

“Today at the Embassy, we joined together in 84 seconds of silence in solidarity with those at home and around the world protesting the murders of George Floyd & others. We sincerely hope that all of us will learn from this episode & use it as inspiration to create a better world.”