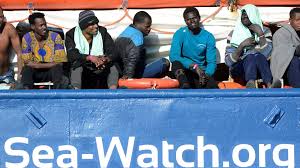 Two charity boats have headed back to the Mediterranean after a two-month hiatus in migrant rescue operations, as humanitarian groups await a new wave of arrivals.

Italian NGO Mediterranea Saving Humans said on Tuesday night that its chartered boat, Mare Jonio, had left the Sicilian port of Trapani to patrol the central Mediterranean on its eighth mission.

It joins the Sea Watch 3, operated by Germany’s Sea Watch, which left Messina in Sicily on Monday.

“Mediterranea is finally back at sea to monitor and denounce the human rights violations that are constantly taking place in the central Mediterranean,” the charity tweeted on Wednesday.

“The Mare Jonio is going back where it belongs, where help and humanity are needed.”

It was the first time the boat had left for a rescue operation since March 20, when it suspended its operations at sea due to the coronavirus crisis.

Hundreds of thousands of migrants have landed on Italy’s shores in recent years, as the primary European port of entry for migrants seeking refuge from Africa and the Middle East.

Italy, along with Malta, closed its ports in April to curb the spread of Covid-19, a month after a nationwide lockdown.

Reports of fresh departures from Libya

At the time, rescue groups accused Rome and Valletta of using the crisis as an excuse to stop taking in migrants.

Corriere della Sera daily, citing intelligence sources, reported on Monday that 20,000 people were prepared to depart Libya by boat to risk the journey to Italy.

Migrant departures from Libya’s coast increased by nearly 300 percent this year between January and the end of April, compared to the same period in 2019, according to the UN Refugee Agency.

Malta has also sounded the alarm on incoming refugees, denouncing the lack of solidarity from other European countries and saying it has taken in a disproportionate share.

The question of migrants reaching Italy’s shores flared up last summer, as the then interior minister Matteo Salvini blocked entry to rescue boats. Salvini, who leads the far-right League party, faces trial in one of those cases.

EU members Italy, Spain, Greece, Malta and Cyprus presented the European Commission earlier this month with a proposal for “a new common and united strategy on immigration and asylum”, according to Italy’s interior ministry.

The proposal, which includes “mandatory relocation” of migrants between all EU member states, also seeks to reduce the burden on “first entry countries, where migrants first land”.