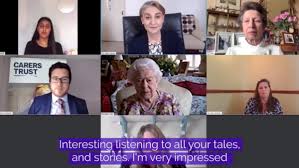 Queen Elizabeth II has kept up with technology throughout her reign, and on Thursday made her debut on a digital platform that has become ubiquitous during the coronavirus outbreak — the video conference call.

The 94-year-old monarch logged in from Windsor Castle, where she has been staying during the COVID-19 outbreak, to speak with carers and discuss how they have been coping.

“Interesting listening to all your tales and stories,” she said, according to an excerpt of the call released by Buckingham Palace.

“I’m very glad to have been able to join you today.”

Her daughter Princess Anne, 69, also logged in for an engagement marking a nationwide week of events highlighting the work of people who care for relatives or friends with a disability, mental or physical illness.

Alexandra Atkins, 24, who looks after her mother, father and grandmother, said it was a “just unreal” to see the royals on the call.

“It hit me that I was sitting in my bedroom talking to Princess Royal (Anne) and the queen,” she said.

The queen’s eldest son and heir, Prince Charles, revealed last week he has been “doing the Facetime” to stay in touch with family and friends during the coronavirus lockdown.

“But it isn’t the same is it? You really want to give people a hug,” he told Sky News television.

The queen has always shown an interest in new technology.

She sent her first email long before most people, from a computer at a British Army base in 1976.

In 2014, she sent her first tweet during a visit to London’s Science Museum, expressing her pleasure at opening a new gallery and signing it “Elizabeth R”.

The “R” stands for “regina”, Latin for queen.

More recently, she held a lockdown weekly audience from Windsor with Prime Minister Boris Johnson — but on an old-fashioned rotary telephone.