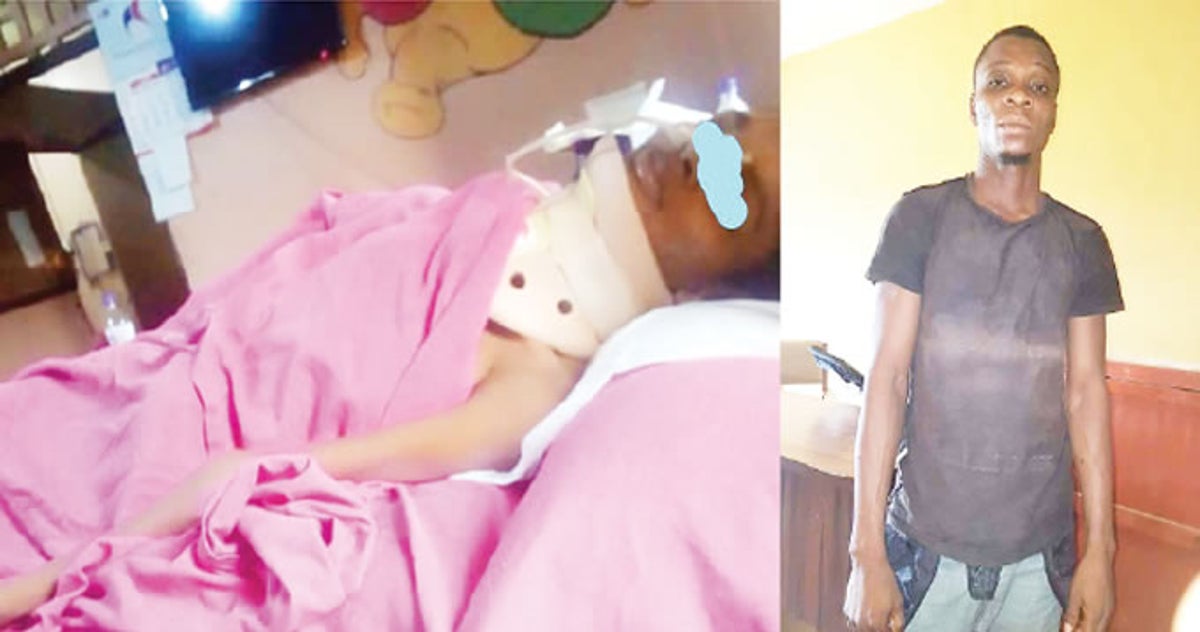 The family of a rape victim, identified simply as Favour, has demanded justice even as she is currently fighting for her life at the National Orthopaedic Hospital, Igbobi, Lagos State.

It was gathered that Favour was allegedly raped until she became unconscious by 28-year-old Godday Robinson and dumped in a deep pit in the Agbara area of Ogun State.

She was returning from work on April 23, 2020 when the incident happened.

Godday allegedly waylaid the victim and raped her for rebuffing his love advances.

Our correspondent gathered that the suspect allegedly beat and slammed the victim on the edges of the drainage channel and later pushed her into it.

Favour, according to her aunt, Mary Bassey, could not talk nor sit as the injury she sustained affected her spinal cord.

Bassey, urged the police to prosecute the suspect.

It was learnt that the Ogun State Government had taken over the medical bills of the victim.

Narrating the incident to our correspondent, Bassey said, “Favour was formerly living with the suspect’s sister, because they work together in the same factory at the OPIC Estate in Agbara. Godday came to visit his sister and saw Favour and after that visit, he started coming frequently and later moved in with his sister till he raped Favour when his sister was not around.

“It was neighbours, who rescued her and took Godday to the police station, where he wrote an undertaken that he would not touch her again, but Favour had to leave his sister’s place and started living with us.

“On the day of the incident, Favour was supposed to come home in the morning after her night duty, but we did not see her; so, we had to call some of her co-workers on the same shift with her, but they said they all left the factory together.

“We started looking for her but we didn’t see her till the next day when someone informed me that they saw a girl inside a gutter claiming that she was raped; so, I went there to check if it was Favour and when I saw her, I could not believe that she would be alive, but people advised that I should go and call the police before we could take her to hospital.

“When the police came, she was able to tell them what happened and who raped her before she was taken to hospital. If the police had not followed us, the hospital would not have attended to us, because her fingernails were peeled off and her face was full of blood.

“She said Godday told her that he was going to kill her and it would be the odour that would make people to know that her corpse was there.

“We moved from one hospital to another before we were finally referred to Igbobi. She still can’t talk or sit as the injury affected her spinal cord. We are passing food through her nose as she can’t eat with her mouth. We want the suspect to be prosecuted for putting Favour’s life in danger; he has cost us a lot of things and we want him to pay for this.”

READ  Man Lures Ex-Girlfriend He Impregnated, Sells Her Twins For N150,000 In Anambra

When contacted, the state Police Public Relations Officer, Abimbola Oyeyemi, stated that the suspect would be charged on Monday as the command had concluded its investigation.

He added that the suspect would be charged with rape and attempted murder.

“The suspect will surely be prosecuted for rape and attempted murder. We can’t allow him to go and commit more atrocities, so he’s going to be prosecuted. The command is just concluding the investigation and he will be charged on Monday,” Oyeyemi said.