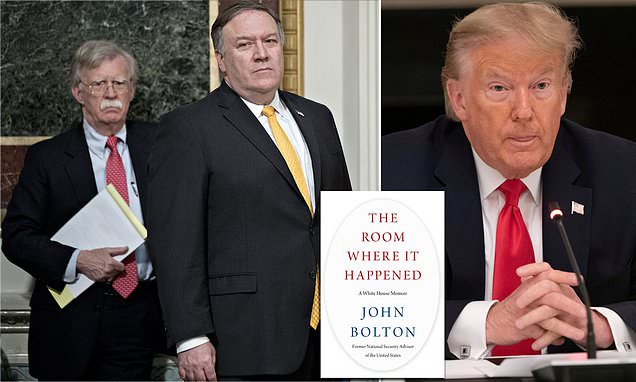 Ahead of the June 23 publication of John Bolton’s explosive new book, the US Secretary of State Mike Pompeo has issued a statement, calling the former national security adviser a “traitor who damaged America by violating his sacred trust with its people.”

Pompeo said; although he has not yet read the book but from excerpts he had seen online it is riddled with “number of lies, fully-spun half-truths and outright falsehoods”.

Bolton’s tell-all book “The Room Where It Happened: A White House Memoir” is set to be released on June 23.

According to excerpts from the book already published by CNN, Washington Post, the New York Times, Bolton alleged that Trump gave personal favors to dictators he liked, wanted China to help him with reelection by buying agricultural products from US farmers, and that all his actions during his time working with Trump was filled with actions Trump took with his reelection in mind.

Bolton also alleged Trump called invading Venezuela ‘cool’ and that during the first summit between Trump and Kim Jong Un, Pompeo passed him a note saying Trump ‘is full of sh*t’

Bolton was sacked in 2019 by Trump after being accused by the US president of advising him to go to war with North Korea and Iran rather than following diplomacy.

In his statement, titled “I Was In The Room Too,” Pompeo said that Bolton was a “traitor who damaged America by violating his sacred trust with its people.”

“I’ve not read the book, but from the excerpts I’ve seen published, John Bolton is spreading a number of lies, fully-spun half-truths, and outright falsehoods,” Pompeo wrote.

“It is both sad and dangerous that John Bolton’s final public role is that of a traitor who damaged America by violating his sacred trust with its people,” he continued. “To our friends around the world: you know that President Trump’s America is a force for good in the world.”

Pompeo’s statement comes as the Trump administration urgently tries to stop the publication of Bolton’s bombshell book , saying that it still contains classified information that Bolton is publishing without permission from the National Security Commission.

The Department of Justice filed for an emergency restraining order to halt the book’s release and called for the hearing to take place on Friday.

“Hundreds of thousands of copies of the book have already been distributed around the country and the world,” the publisher said.

According to the White House, the book’s publication, breaches Bolton’s contract he signed before Trump employed him and compromises national security.

Bolton’s lawyer Chuck Cooper published an op-ed in The Wall Street Journal last week accusing the White House of blocking the publication of the book by using national security “as a pretext to prevent the publication” of the memoir.