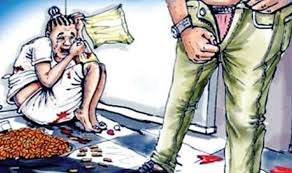 A female musician, Doyinsola Olatunji, on Monday called on the Federal Government to strengthen and enforce stringent laws that would curb the incessant rape cases recorded in the country.

Olatunji told the News Agency of Nigeria (NAN), in Ibadan that rapists ought to be treated like criminals.

“We need the government to put up the right law and order to punish offenders like the criminals they are. Rape is a serious crime and should be treated as such. Let us not wait till it gets out of control, because already it is getting too much.

“ I think rape needs to be treated as a more serious crime because really it is a huge crime. Sometimes we hear rapists are granted bail, some of them even walk away freely.

“Rapists should be treated like the criminals that they are, so it can at least dissuade perpetrators from committing such crime and feeling like they can get away with it.

“This, I think is where the government comes in. We need standard law against rape,” she said.

The entertainer also noted that education and enlightenment is also very crucial to tackling the menace.

“I also think we should educate ourselves more on how to defend ourselves, how not to put ourselves in compromising situations. Educating the kids and letting them know what they should know.

“That they can be molested by even families and relatives. Hence the need to speak up and be more vigilant as parents,” she said.
She, however, urged everyone to stop blaming victims when they speak up.

“Firstly, we should not start by blaming the victim. Already they have been abused, they are mentally and psychological disturbed. The last thing they need is for them to be blamed.

“ Listen to them, talk to them, help them to heal, get them a therapist, encourage them to speak up and report the case to the appropriate authorities to get help

“Please let us stop the stigmatisation. Let us stop blaming victims of rape too. It’s already hard for them and doing all these will not encourage other people to speak up.

“Let us show them support. Together we can put an end to this menace,” she said.