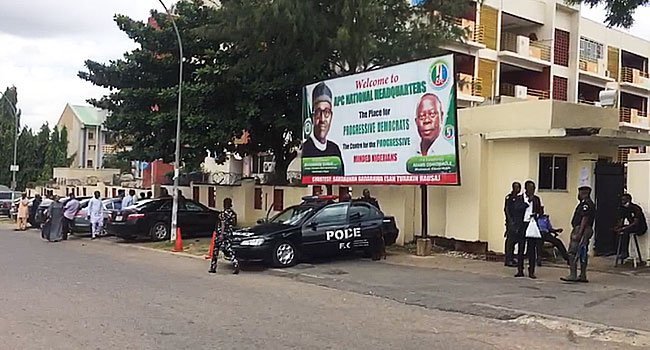 • Why we sent our men there, by FPRO
• Court bars Giadom from role in APC affairs
• Crisis in Ondo over deputy gov’s defection worsens
• Worry as Buhari ‘endorses’ NEC meeting

Armed policemen, yesterday sealed the national secretariat of the All Progressives Congress (APC) on the orders of the Inspector General of Police (IGP), Mohammed Adamu, indicating that the leadership crisis in the party is yet to abate.

It was gathered that the action of the security agents was aimed at averting the escalation of the conflict among members of the National Working Committee (NEC) of the APC.

Both Senator Abiola Ajimobi and Mr. Victor Giadom who occupy the positions of the deputy national chairman (South) and the deputy secretary of the party are laying claim to the seat of the acting national chairman. Prince Hilliard Etta, who is the national vice chairman (South South), is presently acting on behalf of Ajimobi, who is indisposed to exercise the powers conferred on him by a faction of the NWC.

The Guardian learnt that the decision by a faction of the Edo State executive committee to lift the suspension on the national chairman of the party, Adams Oshiomhole, is further worsening the crisis as there was rumour that he might appear at the party’s secretariat to take his seat.

A source confided in The Guardian that Giadom, who is relying on a subsisting court order to lay claim to the seat of the acting chairman, approached the IGP to bar members of the NWC from gaining access to the secretariat

By noon yesterday, a detachment of armed policemen led by the nearby Wuse divisional police officer was on ground to ask all persons, including journalists, to leave the party secretariat.

There was worry yesterday over alleged endorsement by President Muhammadu Buhari of the convocation of the National Executive Committee (NEC) of the APC tomorrow. The development pitted Ajimobi against Giadom, both laying claim to the chairmanship seat of the party. Giadom, who confirmed the planned parley in a terse statement made available to reporters, claimed that it would hold in the State House, Abuja via virtual means.

But Ajimobi, represented by Etta, who met with 15 members of the NWC at the party secretariat at about 7pm, declared that Giadom lacked the locus standi to convene the NEC meeting on the allegation that his action was illegal and alien to the party constitution.

Insisting that Giadom remained suspended, Etta argued that there was no way an emergency NEC meeting would be convened without giving 14 days notice to chieftains of the party.

“It is not right to refer to 17 members, with 15 of them physically present and two who met with us physically, as a faction. This is the National Working Committee NWC of the APC in Nigeria.

“I sit here on behalf of Abiola Ajimobi as the acting chairman of this party. If Giadom is arranging a NEC, I believe that it is your responsibility as a member of the fourth estate of the realm to investigate his locus to find out whether he has the legal, the constitutional backing to be able to call a NEC meeting.

Ajimobi, who conveyed the decision of the NWC to lift the suspension of Oshiomhole, who allegedly spoke after accepting the report of the Hope Uzodinma-led Edo State primaries election committee. He disagreed with the notion held in some quarters that the APC has become a battleground.

The Secretary of the Edo State Governorship Primary Committee, Dr Surajudeen Bashiru, who stood in for Uzodinma declared that the election won by Pastor Ize-Iyamu was held in a peaceful and transparent manner.

The Nigerian Police said its personnel were deployed to the APC secretariat to forestall possible breakdown of law and order, denying taking over the office as reported in the media.

The explanation was contained in a statement by the Force Public Relations Officer (FPRO), Frank Mba, a Deputy Commissioner of Police (DCP).

“The deployment is a proactive move by the Force to maintain peace and ensure there is no breakdown of law and order at the secretariat.

“The presence of police personnel at the secretariat is not to seal-up the complex as has been reported in some quarters but rather to prevent any untoward situation within and around the APC national secretariat.”

Also yesterday, a Rivers State High sitting in Port Harcourt issued an interim injunction barring Giadom from participating in all activities of the party. The court presided over by Justice Chinwendu Nwogu, issued the order based on a motion exparte filed by Okechukwu Ogbonna and Mac-Lord Peterson in a suit in which APC, Igo Aguma (acting chairman of APC in Rivers State), Giadom and Golden Chioma (chairman, fact finding committee, APC Rivers State are respondents.

BESIDES the turmoil at the national secretariat, the Ondo State chapter of the party is also still enmeshed in crisis as police personnel yesterday swooped on the House of Assembly complex over the defection of the Deputy Governor, Agboola Ajayi, to the opposition Peoples Democratic Party (PDP). The incident happened shortly after the State Working Committee (SWC) of the APC, in a statement, ordered Ajayi to honourably resign his position as deputy governor.

Some of the parliamentary workers, who witnessed the scene, said the police only came around but didn’t stay probably because the 26 state lawmakers are on recess. It was learnt that when the security agents stormed the premises of the Assembly complex yesterday morning, many of the workers scampered to safety.

It was further learnt that the police personnel had received instructions to provide security for the lawmakers who would soon begin the process of impeaching the deputy governor.

The incident occurred barely 24 hours after the National Chairman of the PDP, Uche Secondus, formally received Ajayi to the party and cautioned the police against being used to repress the deputy governor due to his defection to the opposition camp.

Another staff of the Assembly, who pleaded anonymity, said: “We got here to see the policemen in our complex this morning manning strategic locations. I overheard one of them saying they were asked by the commissioner of police to stay here.

“Although there have been plans to impeach the deputy governor since he defected to the PDP on Sunday, the presence of the policemen is to provide cover for some of the lawmakers loyal to the governor to carry out the hatchet job.

“As I speak to you now, I have found my way out of the complex while other workers are just running away so that they would not be caught in the web of the crisis.”

Ajayi had declared that would not resign his position as the deputy governor until his people asked him to do so, leaving the state with a PDP deputy governor and APC governor.

MEANWHILE, some aides of the embattled deputy governor, including the Special Assistant to the Governor on New Media, Mr. Allen Sowore, who was recently seconded to Ajayi, have been sacked.

In a statement, the Chief Press Secretary to the Governor, Mr. Segun Ajiboye, said: “The Ondo State Governor, Oluwarotimi Akeredolu, has relieved Mr. Allen Sowore of his appointment with immediate effect. Until his sack, Sowore was a special assistant to the governor on New Media.”

All the affected aides were advised to submit all government’s property in their possession to the Chief of Staff to the Governor.The sacking of Ajayi’s aides was announced yesterday as the deputy governor alleged that Governor Akeredolu had mobilised N260million for his removal from office. Okeowo, shortly after he was sacked, alleged that the state lawmakers had been asked to impeach Ajayi.

In a statement in Akure, Okeowo added that Akeredolu had resorted to “illegal and unconstitutional means” to remove his boss from office.