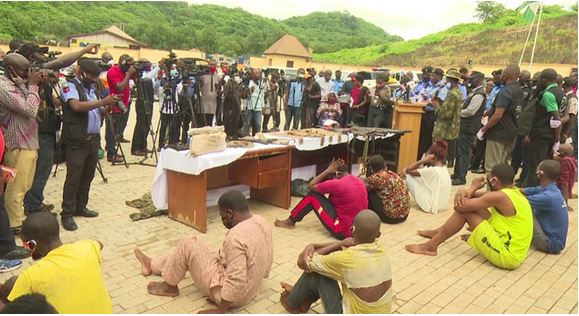 The high-calibre bullets were hidden in a half-bag of rice, according to fresh reports.

Three women were on Wednesday paraded at the Special Anti-Robbery Squad (SARS) office in Abuja for allegedly attempting to transport 818 rounds of live ammunition from Kano State to Bayelsa State, The Nation reports.

The high-calibre bullets were hidden in a half-bag of rice. Force spokesman, DCP Frank Mba, said they were arrested by the Special Tactical Squad unit, adding that the ammunition was given to one of the women, Elena, by her husband, a Lance Corporal in the army, to send to Yenagoa from Kano. He said the soldier had been picked up by military authorities.

Mba said, “Elena, who is 25, husband who is being detained by the Nigerian military, handed over a half-bag of rice to Favour Bello, 21, for onward transportation to Yenagoa. Bello was expected on arrival to hand same to yet another female Priye Jimmy aged 30.

“This half-bag of rice had this ammunition’s carefully concealed. What they failed to realise is that just as they were planning, operatives working with other members of the community were also monitoring activities at the motor park. And eventually when Favour got there and was about to board a vehicle, the bag of rice was searched and opened and the weapons were found.