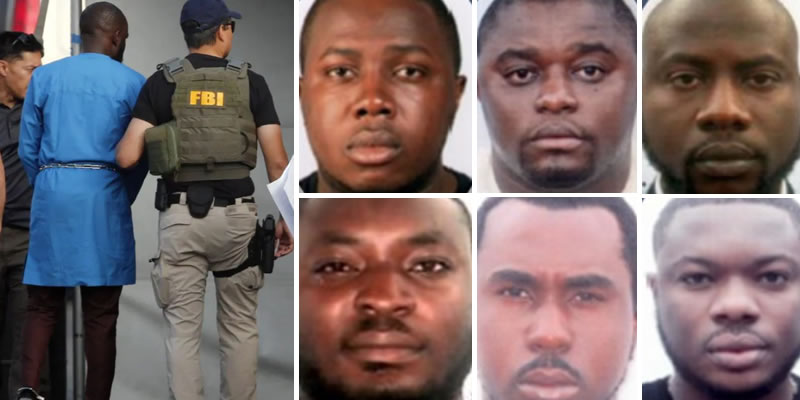 Six Nigerian Nationals sanctioned earlier by the Department of the Treasury Office of Foreign Assets Control (OFAC) in a coordinated action with the U.S. Department of Justice, for allegedly conducting an elaborate scheme to steal over six million dollars from vulnerable victims across the United States have been declared wanted by the Federal Bureau of Investigation (FBI).

The bureau declared them wanted in an early morning tweet on Saturday, requesting for information from the public on the whereabouts.

“Help the #FBI find ​six Nigerian nationals wanted for their involvement in ​business​ email ​compromise (BEC) schemes resulting in over $6 ​million in losses,” the tweet read.

Help the #FBI find ​six Nigerian nationals wanted for their involvement in ​business​ email ​compromise (BEC) schemes resulting in over $6 ​million in losses. Read more about each defendant at https://t.co/Q1OToaIVsl​​, and submit tips at https://t.co/iL7sD5efWD. #FugitiveFriday pic.twitter.com/67TZPHLgHA

It was earlier reported how the US Department of State in a statement on June 16 indicted the suspects named as Richard Uzuh, Micheal Olorunyomi, Alex Ogunshakin, Felix Okpoh, Nnamdi Benson and Abiola Kayode.

Mr Ogunshakin, 37, is said to have provided financial, material, and technological support for Uzuh.

Mr Okpoh, 31, is also said to have provided technological support to Uzuh.

READ  How Kidnap Attempt On Children Was Foiled In A Church In Lagos. Photos/ Video

Mr Benson, 33, is also alleged to have working closely with Uzuh in romance scams and money laundering.

Mr Kayode, 32, is believed to have worked working closely with Uzuh and others involved in the scheme.